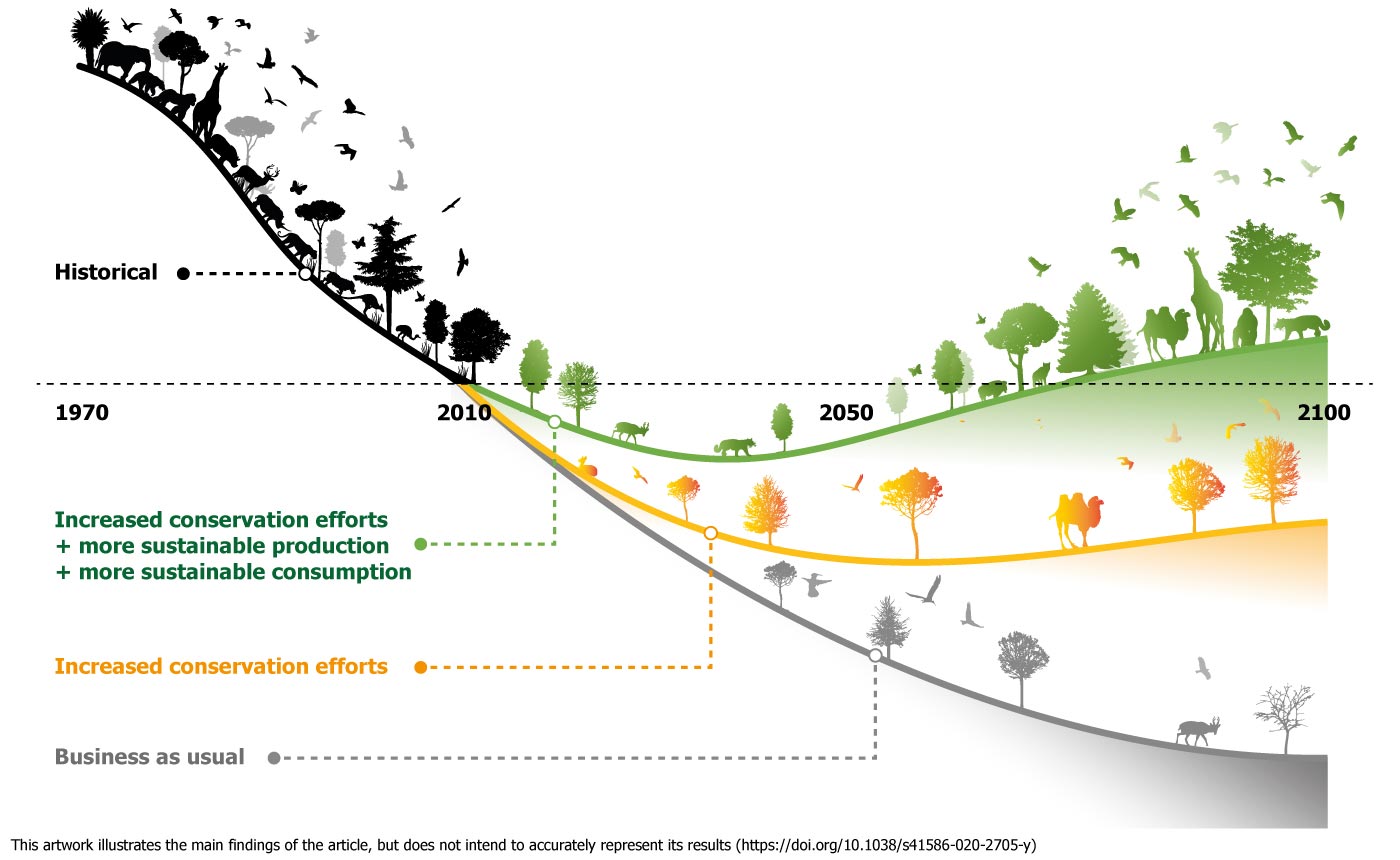 Plant and animal species across the world are steadily disappearing due to human activity.

A major new to provide scientific insight and guidance to policymakers worldwide by finding solutions to global problems through applied systems analysis. In this way, the work helps to improve human wellbeing and protect the environment.“”>IIASA-led study suggests that without ambitious, integrated action combining conservation and restoration efforts with a transformation of the food system, turning the tide of biodiversity by 2050 or earlier will not be possible.

Biodiversity — the variety and abundance of species, along with the extent and quality of the ecosystems they call home — has been declining at an alarming rate for many years. It is clear that we cannot allow the current trend to continue. If it does, there will simply not be enough nature left to support future generations. While ambitious targets have been proposed, practical issues such as feeding the Earth’s growing human population could make reaching such targets a challenge.

The study, which has been published in Nature and forms part of the latest World Wide Fund for Nature (WWF) Living Planet Report, for the first time set out to explore biodiversity targets as ambitious as a reversal in global biodiversity trends and shed light on what integrated future pathways to achieving this goal might entail.

“We wanted to assess in a robust manner whether it might be feasible to bend the curve of declining terrestrial biodiversity due to current and future land use, while avoiding jeopardizing our chances to achieve other Sustainable Development Goals (SDGs),” explains study lead author and IIASA researcher David Leclère. “If this were indeed possible, we also wanted to explore how to get there and more specifically, what type of actions would be required, and how combining various types of actions might reduce trade-offs among objectives and instead exploit synergies.”

Using multiple models and newly developed scenarios to explore how addressing these elements in an integrated way might help reach biodiversity targets, the study provides key information on pathways that could materialize the 2050 vision of the UN Convention on Biological Diversity — “Living in harmony with nature”.

For global trends of terrestrial biodiversity as affected by land use change to stop declining and start recovering by 2050 or earlier, the researchers say that action is needed in two key areas:

– Bold conservation and restoration efforts together with increased management effectiveness, will have to rapidly be stepped up. The study assumes that protected areas quickly reach 40% of global terrestrial areas. This should happen in tandem with large efforts to restore degraded land (reaching about 8% of terrestrial areas by 2050 in the study scenarios) and land use planning efforts that balance production and conservation objectives on all managed land. Without such efforts, declines in biodiversity may only be slowed down rather than halted and any potential recovery would remain slow.

– Food system transformation: As bold conservation and restoration efforts alone will likely be insufficient, additional measures are needed to address global pressures on the food system. Efforts to bend the curve of global terrestrial biodiversity include reduced food waste, diets that have a lower environmental impact, and further sustainable intensification and trade.

Integrated action would however need to be taken in both areas simultaneously to bend the biodiversity loss curve upward by 2050 or earlier.

“In a scenario with increased conservation and restoration efforts alone, almost half of biodiversity losses estimated in the counterfactual business-as-usual scenario could not be avoided, a bending was not observed for all models, and when it did occur, it was often only in the second half of the 21st century. In addition, we found that bold conservation and restoration efforts alone might increase the price of food products, thereby potentially hampering future progress on eliminating hunger,” says Michael Obersteiner, an IIASA researcher and Director of the Environmental Change Institute at Oxford University.

Conversely, scenarios that combined increased conservation and restoration efforts with efforts to transform the food system showed that opportunities for ambitious conservation and restoration efforts were larger, and potential adverse food security impacts defused, thereby securing a bending of global trends in global terrestrial biodiversity as affected by land use change by 2050. Finally, such transformative change in food and land use systems would also deliver significant co-benefits such as a large contribution to ambitious climate mitigation targets, reduced pressure on water resources, reduced excess of reactive nitrogen in the environment, and health benefits.

According to the authors, a true reversal of biodiversity declines will however likely necessitate an even broader set of actions, addressing biodiversity loss jointly with climate change.

“If unmitigated, emerging threats to biodiversity such as climate change and biological invasions may become as important as land-use change — the largest biodiversity threat to date — in the future. A true bending of biodiversity losses will necessitate ambitious climate change mitigation that exploits synergies with biodiversity, rather than further eroding biodiversity,” says Andy Purvis, professor at the Imperial College London, and researcher at the National History Museum in the UK.

With the Strategic Plan for Biodiversity 2011-2020 coming to an end with mixed outcomes, the study’s findings are directly relevant to on-going negotiations at the United Nations Convention on Biological Diversity.

“This study shows the world may still be able to stabilize and reverse the loss of nature. But to have any chance of doing that as early as 2030 we will need to make transformational changes in the way we produce and consume food as well as bolder, more ambitious conservation efforts,” says Mike Barrett, executive director of science and conservation at WWF-UK and a coauthor of the study. “If we don’t do this, and continue with business as usual, we will end up with a planet that cannot support current and future generations of people. Never has a “New Deal for Nature and People” that halts and starts to reverse biodiversity loss, been needed more.”

This article originally appeared on scitechdaily.com

Taking action against waste at home