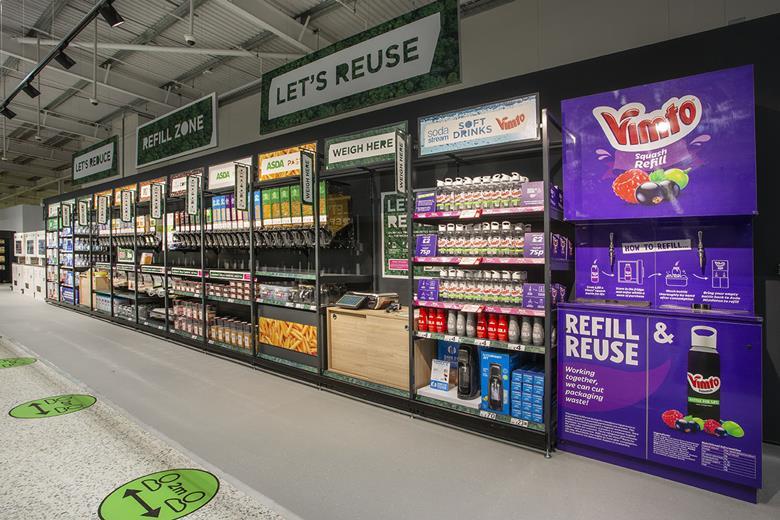 Asda, a leading supermarket chain in the UK, has launched a sustainability store in Leeds where customers do not need to go home with their goods in disposable packaging. This includes buying their favorite brands such as Coca-cola, Nestle, Mars, and Kellogg’s as well in refillable containers or returnable bottles.

The retailer announced that it has now a total of 76 products that have joined its refill programme since it opened in October 2020. Other products that can be found in the store include Yorkshire Tea, Napolina, and Tilda brands. It further said that it plans to rollout the system across its stores.

Packaging has been a major source of waste in landfills, particularly plastic, and recycling efforts have not achieved significant success. The refill trend is starting to gain traction among European supermarkets where package-free formats are being made available for customers.

“This is an issue that matters greatly to our customers – our own insight tells us that more than 80 per cent believe that supermarkets have a responsibility to reduce the amount of single use plastics in stores. We want to give them the opportunity to live more sustainably by offering them great product choices and value, underpinned by a promise that they won’t pay more for greener options at Asda,” Roger Burnley, Asda’s CEO and President, said in a statement.

Shoppers in the area can now conveniently reduce, reuse and recycle with ease and bring their refillable containers to buy their favorite products such as pasta, cereals, and other household items.

The trend reflects the future of retail and supermarkets like Asda are committed to make the change. The latest move is part of its commitment to eliminate at least 3 billion single use plastic from its own products by 2025. It targets to make shopping more sustainable for its visitors by providing at least 40 refillable items in its stores by the same year.

Paving Stones Out of Recycled Plastic