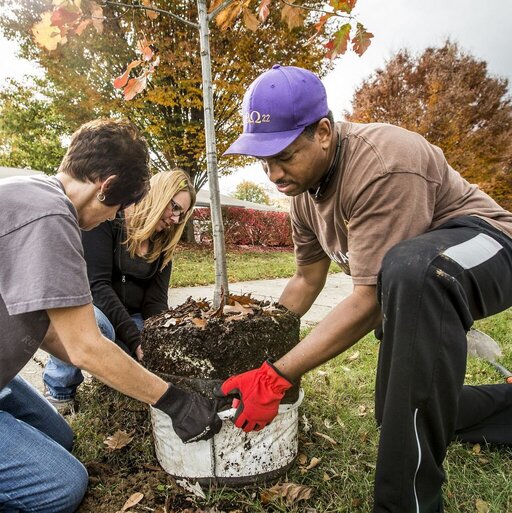 Cities across the U.S. are pledging to plant trees and restore urban forests to combat climate change and cool off disadvantaged communities.

As the U.S. grapples with natural disasters and racial injustice, one coalition of U.S. cities, companies and nonprofits sees a way to make an impact on both fronts: trees.

Specifically, they committed to planting and restoring 855 million of them by 2030 as part of the Trillion Trees Initiative, a global push to encourage reforestation to capture carbon and slow the effects of global heating. Announced on Thursday, it’s the first nationwide pledge to the program, and additionally noteworthy because the U.S. group — which includes Microsoft Corp. and Mastercard Inc. — will focus on urban plantings as means of improving air quality in communities that have been disproportionately affected by pollution and climate change.

“We’re passionate about urban forestry and the goal of tree equity,” says Jad Daley, president and chief executive officer of American Forests, the longtime conservation group that’s helped organize the pledge. “It’s not just about more trees in cities. If you show me a map of tree cover in any city, you’re showing me a map of race and income levels. We see this as nothing less than a moral imperative.”

While the urban commitments to trees make up a small fraction of the 855 million trees pledged thus far, they do represent a significant investment in greening urban America. Tucson, Arizona, will plant 1 million trees, with Mayor Regina Romero specifically calling out a commitment to “front-line and low-income communities.” Dallas is pledging more than 18 million trees, Detroit will plant 50,000 citywide, and Chicago promised to boost its tree canopy by 4 percent. Boise, Idaho’s City of Trees challenge promises add 335,000 new trees to the city’s landscape. The Arbor Day Foundation also pledged to plant 25 million trees in urban areas nationwide.

Daley specified that, like all commitments to the group, the urban pledges represent a combination of new plans and existing ones that have already been announced; the overall 855 million figure represents trees that participants have said will be “conserved, restored, or grown” in the next decade.

Urban forestry has become a popular part of initiatives to lower carbon emission, fight air pollution and improve quality of life: Both the U.K. and Paris have also outlined significant initiatives. Research demonstrates the return on investment of such schemes, says Adrian Benepe, currently vice president and director of national programs for the Trust for Public Land and a former NYC parks commissioner during the city’s MillionTreeNYC initiative. (Michael R. Bloomberg, the former mayor of New York and founder of CityLab owner Bloomberg LP, continues to support tree-planting initiatives through his philanthropic foundation.) A U.S. Forest Service study found that trees in urban areas reduce the energy spent on heating and cooling by 7%, or $7.8 billion annually.

“It’s the fastest way that you can address not just mitigating climate change, but reversing it,” Benepe says. “There isn’t a machine invented that can suck down carbon better than trees.”

The Trillion Trees initiative has come together fast; born during discussions in Davos last January, it immediately sparked “intense interest” in the U.S., says Daley, encouraging a diverse coalition to quickly move toward making an announcement. (One champion of the idea: Marc Benioff of Salesforce.com Inc.) But can a plan coming out of one of the most exclusive confabs in the world, a symbol of the elites, truly deliver on its promise of both equity and environmental impact?

Recent research shows that without an equity component, urban tree-planting efforts can fall short. While every tree certainly helps, advocates say they need to be part of a larger suite of actions, and shouldn’t be a reason to stop or stall efforts to reduce carbon emissions. To truly address climate change, large-scale plans like Trillion Trees must reach traditionally disinvested neighborhoods and communities that need cooling, shade, and green space. But those leading such efforts also need to devote resources to managing and expanding urban forests — areas of denser woods, like those found in city parks and nature reserves. These provide more efficient carbon mitigation.

“It’s not binary,” says Benepe. “Street trees and trees in forests have different advantages. Street trees provide cooling and carbon capture, and are especially positioned to capture particulate matter. For a real urban drawdown in emissions, preserving existing urban forests and expanding them can get more bang for the buck.”

New research by the Natural Areas Conservancy, a New York-based group focused on preserving and protecting urban forests, highlights just how much more efficient they can be at storing carbon. The roughly 6 million trees in the New York City’s 7,300 acres of natural forested areas represent a quarter of the city’s tree canopy, due to their density, but they account for 69 percent of the stored carbon and 83 percent of the sequestered carbon across the city. (Think of stored and sequestered like a savings versus checking account, with stored representing more long-term carbon capture.) 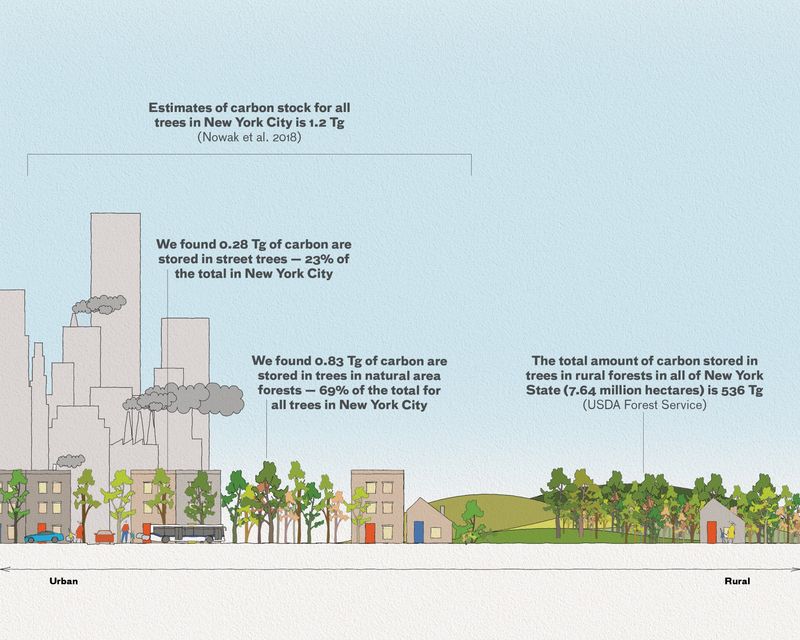 According to Clara Pregitzer, a conservation scientist with the Natural Areas Conservancy, this study underscored why urban forests, dense areas of native trees which provide such effective carbon mitigation, require more care and maintenance. NAC created a maintenance plan with the New York City Department of Parks & Recreation in 2018 focused on forested parkland, with a greater focus on supporting natural regeneration and lower-cost interventions such as clearing away vines and invasive species. The plan found the city’s parks at a tipping point; if the city didn’t invest in forest management and care, it could lose extensive amounts of stored carbon, setting back the larger goals of overall tree-planting initiatives.

“Our urban forests are under a lot of stress,” Pregitzer says. “Similar to state parks, they’re dominated by old trees that need a lot of care, and it’s often thought that they can take care of themselves.”

Sarah Charlop-Powers, the NAC’s executive director, believes that the group’s research shows that an urban tree agenda should work on multiple fronts, with a focus on equity and climate. First, make sure to expand tree planting and shade in vulnerable neighborhoods, but also add a real focus on improving the management of natural areas, protecting them from development (between 2015 and 2019 Nashville lost 8,000 acres of natural area, and Houston lost 20,000, according to analysis of Trust for Public Land data) and funding efforts that make them more accessible to more residents, such as improving the trail system and wayfinding and investing in transit access.

“There’s lots of overcrowding in New York City parks right now, and we have 10,000 acres of natural area parkland that isn’t up to the task of accommodating people,” she says. “We have 1.7 million acres of these natural areas in the 100 largest U.S. cities. Think about all the people living in those cities that need the space to recreate outdoors. Think about all the mutual benefits.”

In addition to maintaining existing urban forests in parks, cities should also focus on ways to increase dense tree cover outside of parklands, says Benepe. They can use areas such as abandoned railways, utility corridors, and public right-of-ways: Every bit counts, and “trees are pretty good at growing in inhospitable places.”

In places like New York City, finding room for new, dense forests is increasingly challenging. But Pregitzer says in cities like Detroit, which has shrunk dramatically from a previously larger footprint, forests can be part of the answer to the question of how to reuse vacant space — as long as community members are directly involved and engaged in this process, and resources for a proper management plan are put in place.

The U.S. commitment the Trillion Trees pledge represents is a sign of the value being placed on trees; the true success of the initiative will be in how it strategically positions them. Participating entities need to submit data about their forestry practices, how the trees being planted will respond to climate change, and their community engagement plans, all of which will be reported annually and released as part of a annual report.

American Forests is also developing a national tree equity score that factors in the heat island effect and neighborhood income levels, and can be used by cities and other groups to evaluate their work. Daley expects many more cities to come forward and join the movement; after all, at the local level, there are few actions governments can take that fight climate change, improve air and water quality, advance equity, and improve the mental health of citizens, all at once.

“This isn’t about scenery,” he says. “This is about adding life-saving infrastructure for cities.”