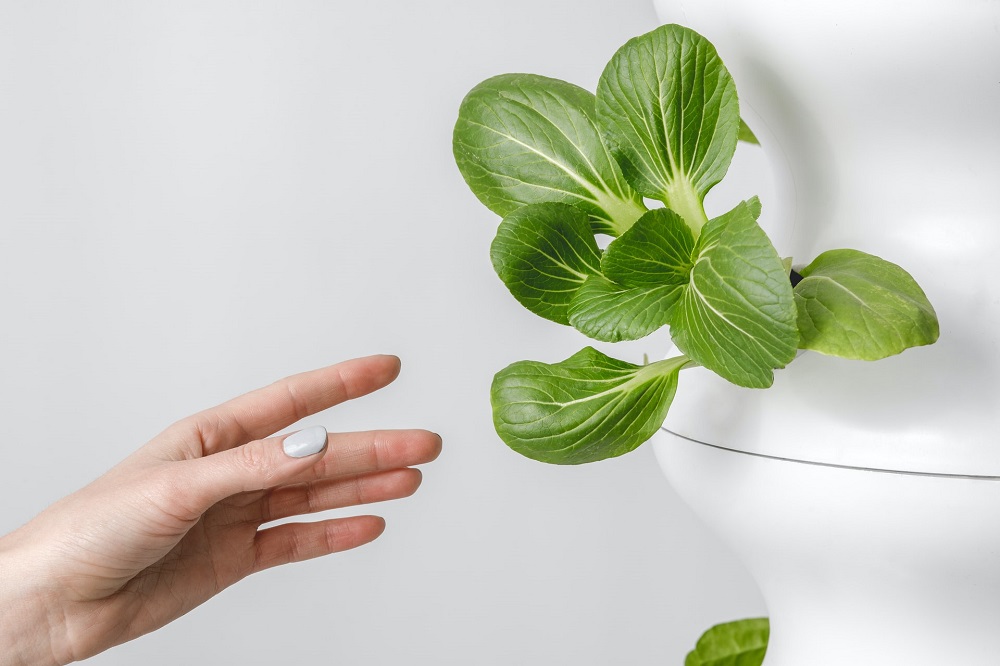 From palm trees harvested for their oil destroying an increasing portion of Indonesia’s and Malaysia’s rainforest alongside its biodiversity to the progressive but already dramatically advanced mass destruction of our arable lands, our current industrial agri-food system is unsustainable and needs to be improved at almost every stage.

As a quick and non-exhaustive reminder, other major issues agriculture is currently facing also include:

These alarming risks both generated by and threatening our agricultural model and our necessary ability to keep feeding a growing population does not even integrate additional adverse consequences arising from climate change… We will not focus on how the end customer can play a key role in reducing our industrialized agriculture’s environmental impact by adjusting its consumption habits in this article. 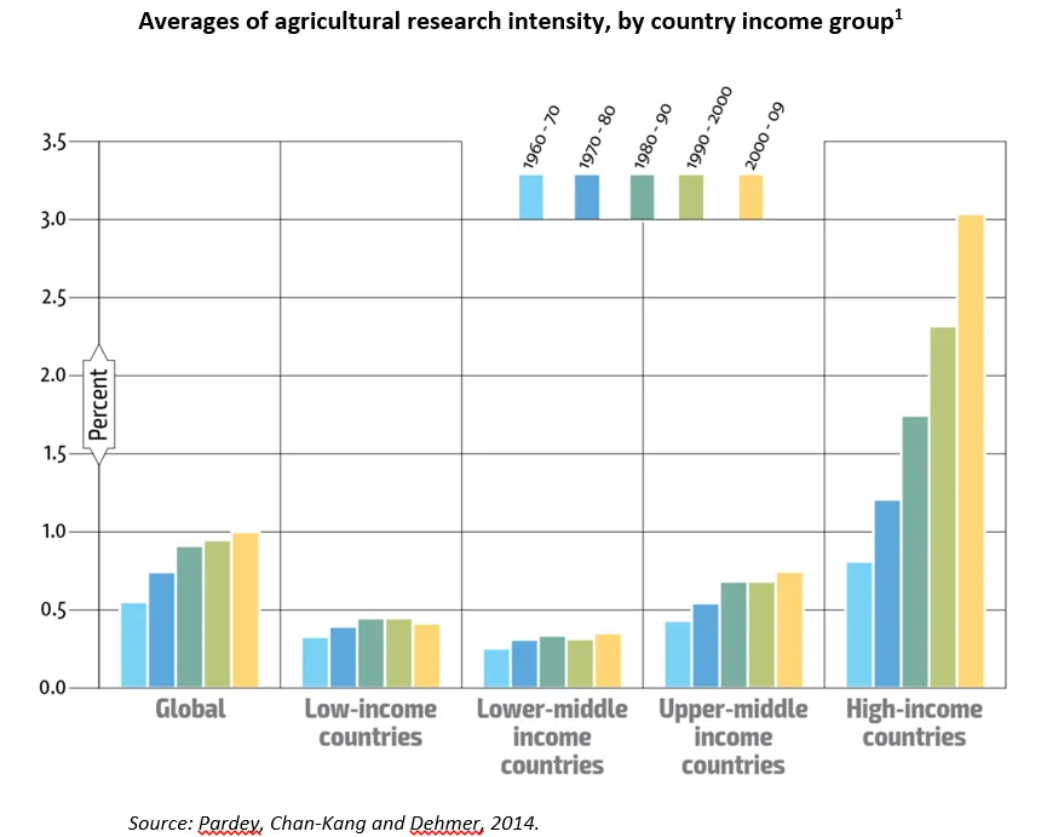 Although intensified agriculture has been working on improving its processes by rationalizing the consumption of natural resources like water, chemical fertilizers, nutrient, or nitrogen, its environmental footprint is still far from reaching the sustainability level. To meet world demand in 2050, the FAO forecasts that the agriculture industry will need to produce 50% more food, feed and biofuel than it did in 2012. In low income countries, livestock production and aquaculture, among the biggest contributors to GHG emissions within the agriculture sector, have been growing at the fastest paces.

Considering that an increase of cultivated lands will not represent a prioritized solution to feed a growing population as evidenced by a continued decrease of arable land per capita over the last decades despite significant non-cultivated arable lands available, the logical option consists in increasing crop yields in low-income countries, which are significantly lagging high-income countries and where the population growth will mainly occur.

However, if such a lag is due to a lack of market integration and smaller farm sizes, it is also due to a significantly lower adoption rate of more productive technologies, a productivity increase which also often implies harmful effects for the cultivated areas.

Climate-smart agriculture including conservation agriculture, agroecology and agroforestry have started to develop and promote a more sustainable use of natural resources and production processes. If the total factor productivity (“TFP”) in agriculture, which refers to an increase in output owing to more efficient processes rather than increased inputs, has been increasingly contributing to the overall agriculture production output increase over the years, such factor does not imply that these efficiencies have a systematic positive environmental impact. The below chart illustrates how countries have been increasingly trying to find a solution to solve the food supply equation.

Although various startups such as AGERpoint, Auravant, Less Industries, Kilimo, CropX, or BovControl have been developing solutions improving monoculture’s yields and, sometimes, environmental footprint, the road to a sustainable agriculture industry still seems infinite… But new solutions have emerged and help solving these everlasting issues. Among them, vertical urban farming has seen a record infatuation and popularity from investors and the civil society more broadly.

A paper published in January 2018 presents a method researchers developed to quantify the urban space available for farming. According to their conclusions, urban agriculture could produce between ~100 and ~180 million tonnes of crops annually, representing ~2% to ~3% of total annual crop production. For some specific plants like dry and root vegetables, urban agriculture could represent 10% of the total production.

Furthermore, this type of agriculture would have significant positive environmental effects in urban areas including air cooling and decontamination, natural flood protection, azote uptake, energy savings via natural building insulation and lower greenhouse gas emissions by reducing food transportation. In total, the potential savings reach US$80 to US$160 billion. However, these assumptions do not include the productivity increase generated by vertical farming techniques and increased automation.

Startups on the prowl

Over the same period, the global AgTech sector raised ~$10bn. These massive funding rounds are fueling international ambitions and the race to cease the biggest market share of an expected ~$10bn vertical farming opportunity by 2025 (~22% CAGR).

However, there is one aspect that the abovementioned companies do not consider and that the company we will focus on in this article, Laurus, fully does: the use of existing urban infrastructure in developing countries. Indeed, if the business model vertical urban farms have been developing in the western world is dependent on the characteristics of these markets, which are a relatively high disposable income, an increasing willingness to consume and spend more on sustainably grown food, and a spreading sensitivity to locally produced crops, we must assume that their global ambitions imply a capability to adjust their model to developing markets’ consumption habits and future drivers.

It is to be noted that vertical urban farms need a significant flat space to install heavy and voluminous greenhouses. These need to be set up on sizeable and resilient existing or new buildings, a quite complex constraint when considering fast growing metropolitan areas in the developing world.

Laurus understood all the benefits from vertical urban farming including reduced carbon impact from lower transportation requirements, air decontamination in cities, productivity gains from vertical harvesting technology, drastically reduced consumption of water (-80%) and earth (-60%) and the complete absence of pesticide and fungicide.

However, the startup wants to go beyond these “conventional” improvements brought by the vertical indoor farming industry and be the most convenient and logical solution for growing crops in urban areas of the developing world.

To do so, Laurus developed an inflatable greenhouse which:

Retail volume in developing countries is still heavily relying on local stores which have more flexible purchase agreement terms than concentrated large distributors. Nicolas Bisso, Laurus’ CEO and Founder, calculated that the retail price of such grown plants would be competitive versus current market retail prices.

The breakeven point for one greenhouse of 50 square meters is expected to be ~14 months and does not require the investor to do anything from installation to long term maintenance. The company is planning a crowdsourcing campaign to demonstrate the relevance and unprecedented opportunity its inflatable greenhouse represents. Various sites have been identified in Buenos Aires and will become pilots over the next few months. Plants that can be grown in Laurus’ greenhouse currently include kale, spinach, basil and rucola salad.

Laurus is also planning to launch a crowdfunding campaign on the coming months to commercialize a fully automatized electronic tower which can handle the complete harvesting process of various plants directly in your home, apart from light and temperature control.

Technologies being currently developed together with improving business models offer promising solutions to the challenge of bringing parts of our agriculture closer to our doorstep. Vertical urban farming appears to be the key solution, but innovation is still seething and focusing on smart ideas solving as many issues as possible will become the next hurdle for investors and consumers.

COVID-19 is the opportunity to put people and planet first

Microplastics are contaminating the fruit and vegetables we eat, according to separate scientific studies published this week