Dubai: Goumbook, a social enterprise that aims to promote sustainability in the UAE, has launched a nationwide awareness campaign called Drop It Youth (DIY) urging youngsters to rally against single-use plastic. The drive has been inspired by Goumbook’s earlier campaign in 2016 called ‘Drop It’ which targeted individuals and local businesses.

“The more we ran the Drop It campaign, the more we felt the need to address this issue with youth in the age group 11 to 22 years,” said Tatiana Antonelli Abella, founder of Goumbook. “Tomorrow’s leaders have to be equipped for tomorrow’s challenges, and it is our duty to prepare them for the future they will inherit.”

On February 3, International Straw Free Day, 30 youth ambassadors were selected to kick off the campaign, which will run till the end of April.

Goumbook and its supporting partners (Environmental Agency Abu Dhabi, Knowledge and Human Development Authority, Eco-schools and Emirates Wildlife Society – World Wildlife Fund) will empower the ambassadors with content, data and materials they can use to run the campaign among their communities and schools. The idea is for them to leverage Goumbook’s support and transform it into online pledges.

The ambassadors’ aim is to convince people to stop using single-use plastic bottles, cups, bags and straws and to switch to filtered tap water. By mentioning which ambassador convinced them to take that pledge, users contribute to measure each ambassador’s environmental impact.

Abu Dhabi’s home grown environmentalist, Abdul Mukeet (the Paper Bag Boy) said that becoming an ambassador for this project was the perfect way to mark eight years of his personal campaign. This 11th grader at Abu Dhabi Indian School hopes to take the campaign forward through Indian associations and other NGOs.

Neola Castelina, 13, from Our Own English School, Sharjah, is a member of Emirates Environmental Group and an ambassador for Bee’ah (Sharjah Environment Company) as well. She aims to encourage the use of jute bags in supermarkets, stores and malls.

Mia Ghrayeb from Jumeirah College, Dubai, played an active part in her school’s ‘plastic cups have gone’ campaign. She said she would use her social media accounts to spread awareness.

“As climate change is being felt across the globe and its long-term catastrophic impacts have never been so scientifically clear, environmental education is the key to a better future,” said Antonelli.

•13 billion plastic bags are used every year; that is 1500 bags per person per year. (UAE Ministry of Climate Change and environment)

•60,000 tonnes of CO2 is emitted just to manufacture the annual plastic water bottles needed for consumption.

•50% of the plastic in the world is for single use 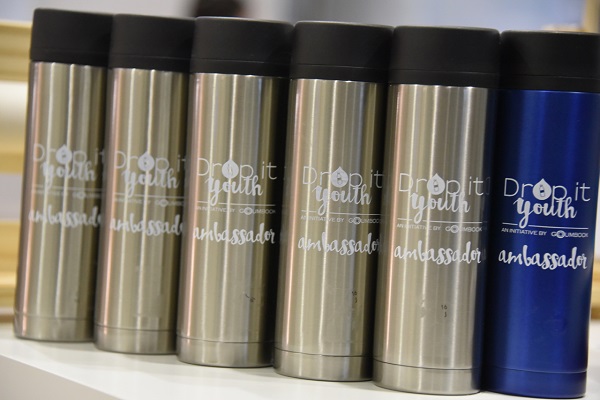 Dubai Can: why and how to choose the right filtration system for your home