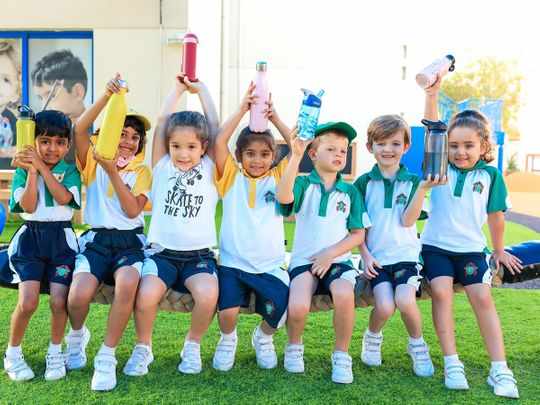 Gems Education, Gulf Model School, Uptown International School, and Indian High School are just some of the schools which have installed more water stations for students to refill their bottles instead of buying water in single-use plastic bottles, according to news reports.

Asha Alexander, principal of Gems Legacy School in Dubai, shared to the media that their school has installed a total of 16 water refilling stations with 12 more to be added this year. Ms. Alexander who is the executive leader of the Gems Education group of schools in the emirate, said that the school does not procure any single-use plastic as part of its plans to phase it out from the schools and promote environmental education to its students.

Dubai Can campaign encourages people across the emirate to bring their own refillable water bottles and use free public water fountains across the city instead of buying single-use water bottles. The initiative aims to reduce the plastic waste which eventually are disposed of in landfills and or oftentimes littered.

Shiny Davison of Gulf Model School commented to The National: “We have incorporated ‘Dubai Can and We Can Too’ in our curriculum so that it becomes a mandatory part of every social studies classroom.”

Davison’s school also has stopped selling water bottles in their canteen. The same goes for Uptown International School, said its principal Rob Commons. “What we’ve done now is we’ve removed all of these and replaced them with the mains linked to water filters. So we’ve invested in 14 or 15 of those across the site, so that our pupils can use them at any time to refill their bottles,” he told the newspaper.

Meanwhile, the Indian High School has also stepped up immediately and all teaching and non-teaching personnel have been given refillable bottles, Punit MK Vasu told Gulf News. “This is to encourage staff to refill water across drinking stations in the school, which are now across the city as well. The bottles have been provided free-of-cost to all our staff,” he said.

Single-use plastic bottles are among the most littered plastics in the UAE and in many parts of the world, impacting the environment and people and animals’ health. This has led to the launch of global campaigns aimed at curbing its use and promote the use of more refilling stations as a more sustainable way to hydrate people. Some companies which previously use single-use plastic bottles in beverages have shifted to aluminium cans, considering it as a more recyclable alternative.