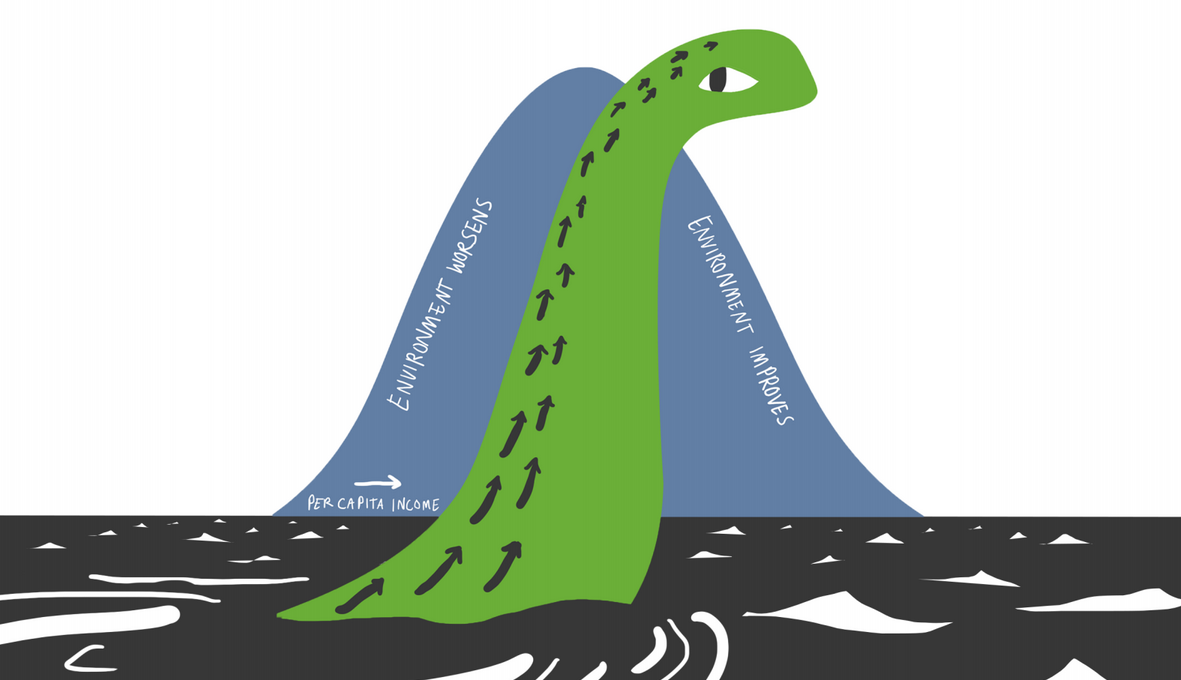 A report published by the European Environmental Bureau (EEB) in July 2019 proposes arguments against ‘green growth’ as a sole strategy for sustainability, arguing that there is neither empirical evidence supporting the existence of an eco-economic decoupling near the extent required to avoid environmental degradation nor is this likely to happen in the future. According to the authors, environmental pressures such as climate breakdown and mass extinction can only be reduced by rethinking green growth policies, whereby a sufficiency approach – the downscaling of production in certain sectors and parallel reduction of consumption – complements increased efficiency.

This report provides compelling evidence for why GDP growth can no longer be the main measure of progress and even “greening” GDP growth is extremely unlikely to ever halt the environmental degradation our planet is facing. 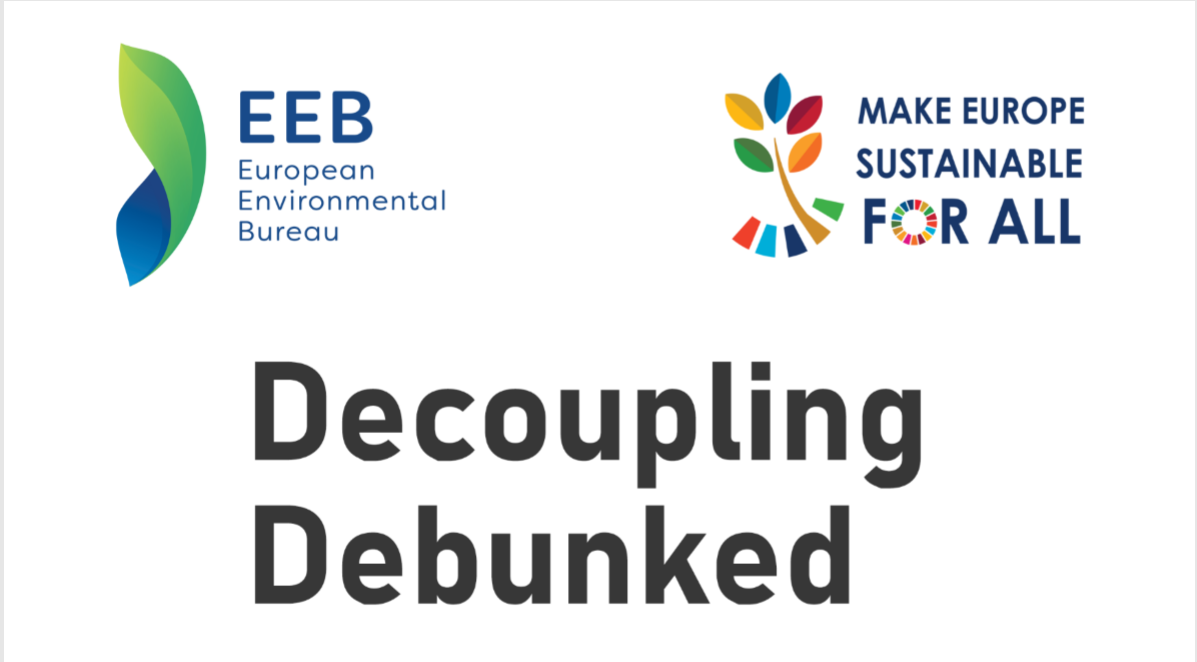 Is it possible to enjoy both economic growth and environmental sustainability? This question is a matter of fierce political debate between green growth and post-growth advocates. Over the past decade, green growth clearly dominated policy-making with policy agendas at the United Nations, European Union, and in numerous countries building on the assumption that decoupling environmental pressures from gross domestic product (GDP) could allow future economic growth without end.

Considering what is at stake, a careful assessment to determine whether the scientific foundations behind this “decoupling hypothesis” are robust or not is needed. This report reviews the empirical and theoretical literature to assess the validity of this hypothesis. The conclusion is both overwhelmingly clear and sobering: not only is there no empirical evidence supporting the existence of a decoupling of economic growth from environmental pressures on anywhere near the scale needed to deal with environmental breakdown, but also, and perhaps more importantly, such decoupling appears unlikely to happen in the future.

It is urgent to chart the consequences of these findings in terms of policy-making and prudently move away from the continuous pursuit of economic growth in high-consumption countries. More precisely, existing policy strategies aiming to increase efficiency have to be complemented by the pursuit of sufficiency, that is the direct downscaling of economic production in many sectors and parallel reduction of consumption that together will enable the good life within the planet’s ecological limits. In the view of the authors of this report and based on the best available scientific evidence, only such strategies respect the EU’s ‘precautionary principle’, the principle that when the stakes are high and the outcomes uncertain, one should err on the side of caution.

The fact that decoupling on its own, i.e. without addressing the issue of economic growth, has not been and will not be sufficient to reduce environmental pressures to the required extent is not a reason to oppose decoupling (in the literal sense of separating the environmental pressures curve from the GDP curve) or the measures that achieve decoupling – on the contrary, without many such measures the situation would be far worse. It is a reason to have major concerns about the predominant focus of policymakers on green growth, this focus being based on the flawed assumption that sufficient decoupling can be achieved through increased efficiency without limiting economic production and consumption.

Depending on the indicators considered to account for economic activities and environmental pressures as well as the range of their evolution, decoupling can be characterised in different ways. It can be global or local, relative or absolute, territorial- or footprint-based, happen over a short or a long period of time, and last but not least, it should be put in perspective with relevant environmental thresholds, political targets and the global socio-economic context, as to assess its adequacy in magnitude taking into account equity considerations.

> The validity of the green growth discourse relies on the assumption of an absolute, permanent, global, large and fast enough decoupling of economic growth from all critical environmental pressures.

The literature reviewed clearly shows that there is no empirical evidence for such a decoupling currently happening. This is the case for materials, energy, water, greenhouse gases, land, water pollutants, and biodiversity loss for which decoupling is either only relative, and/or observed only temporarily, and/or only locally. In most cases, decoupling is relative. When absolute decoupling occurs, it is observed only during rather short periods of time, concerning only certain resources or forms of impact, for specific locations, and with very small rates of mitigation.

> There are at least seven reasons to be skeptical about the occurrence of sufficient decoupling in the future.

Each of them taken individually casts doubt on the possibility for sufficient decoupling and, thus, the feasibility of “green growth.” Considered all together, the hypothesis that decoupling will allow economic growth to continue without a rise in environmental pressures appears highly compromised, if not clearly unrealistic.

1. Rising energy expenditures. When extracting a resource, cheaper options are generally used first, the extraction of remaining stocks then becoming a more resource- and energy-intensive process resulting in an increase in total environmental degradation per unit of resource extracted.

2. Rebound effects. Efficiency improvements are often partly or totally compensated by a reallocation of saved resources and money to either more of the same consumption (e.g. using a fuel-efficient car more often), or other impactful consumptions (e.g. buying plane tickets for remote holidays with the money saved from fuel economies). It can also generate structural changes in the economy that induce higher consumption (e.g. more fuel-efficient cars reinforce a car-based transport system at the expense of greener alternatives, such as public transport and cycling).

3. Problem shifting. Technological solutions to one environmental problem can create new ones and/or exacerbate others. For example, the production of private electric vehicles puts pressure on lithium, copper, and cobalt resources; the production of biofuel raises concerns about land use; while nuclear power generation produces nuclear risks and logistic concerns regarding nuclear waste disposal.

4. The underestimated impact of services. The service economy can only exist on top of the material economy, not instead of it. Services have a significant footprint that often adds to, rather than substitute, that of goods.

5. Limited potential of recycling. Recycling rates are currently low and only slowly increasing, and recycling processes generally still require a significant amount of energy and virgin raw materials. Most importantly, recycling is strictly limited in its ability to provide resources for an expanding material economy.

6. Insufficient and inappropriate technological change. Technological progress is not targeting the factors of production that matter for ecological sustainability and not leading to the type of innovations that reduce environmental pressures; it is not disruptive enough as it fails to displace other undesirable technologies; and it is not in itself fast enough to enable a sufficient decoupling.

7. Cost shifting. What has been observed and termed as decoupling in some local cases was generally only apparent decoupling resulting mostly from an externalisation of environmental impact from high-consumption to low-consumption countries enabled by international trade. Accounting on a footprint basis reveals a much less optimistic picture and casts further doubt on the possibility of a consistent decoupling in the future.

> This report highlights the need for a new conceptual toolbox to inform and support the design and evaluation of environmental policies.

Policy-makers have to acknowledge the fact that addressing environmental breakdown may require a direct downscaling of economic production and consumption in the wealthiest countries. In other words, we advocate complementing efficiencyoriented policies with sufficiency policies, with a shift in priority and emphasis from the former to the latter even though both have a role to play. From this perspective, it appears urgent for policy-makers to pay more attention to and support the developing diversity of alternatives to green growth.

Hotels In Oman Are Rolling Out Environmental Initiatives