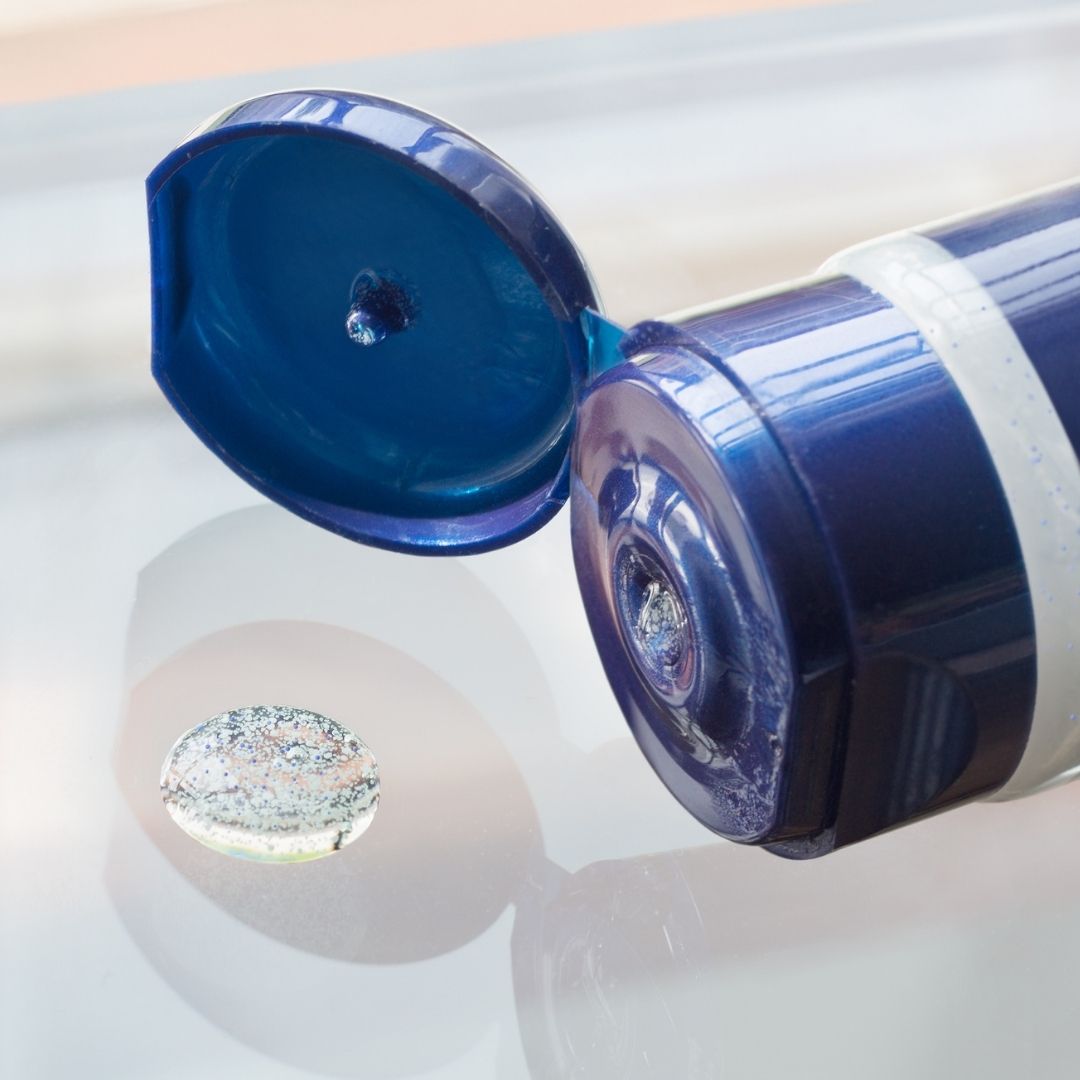 Consumers of major cosmetics brands could be beautifying their bodies tainted with
microplastic pollution with 87 per cent out of 7,704 beauty products reviewed turning out to be containing microplastics.

According to the Plastic Soup Foundation’s published report ‘Plastic: The Hidden Beauty Ingredient’, nine in ten of the top-selling brands were found to have all possible synthetic polymers – whether it is added in solid, liquid, semi-liquid or water-soluble form – including nanoplastics and biodegradable plastics.

The concern about the pervasiveness of microplastic pollution has become increasingly alarming as a recent study has shown that these tiny particles are present in the human bloodstream, which could greatly impact human health. 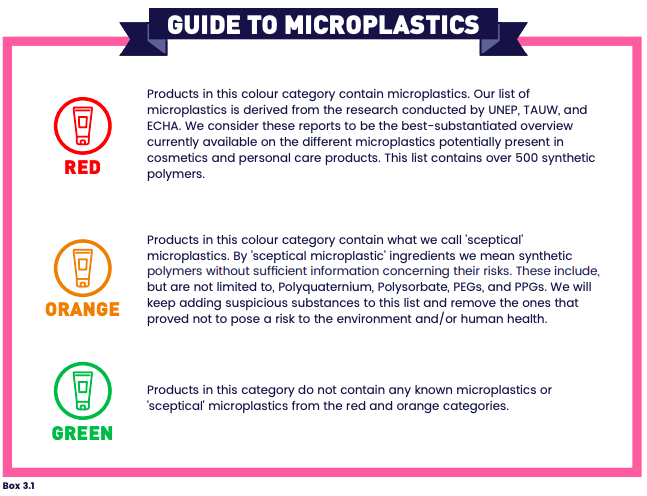 Image from the report ″Plastic The Hidden Beauty Ingredient″

The environmental group said that its study focused on the ten most popular brands such as L’Oréal Paris, Elvive/Elseve, Garnier, Nivea, Gillette, Oral-B, Head & Shoulders, Dove, Rexona, and Axe, which are products of Europe’s four largest cosmetics manufacturers including L’Oreal, Beiersdorf, Procter & Gamble, and Unilever). In total, they produce about 7,704 different products, and only 13 percent were found to be free of microplastics.

“Because the industry is not transparent about the use of plastic in personal care products, we relied on the data we collected with our app Beat the Microbead. With this free app, consumers worldwide have now scanned more than three million products to see if they contain microplastics and if so, which ones,” the group noted in a statement. 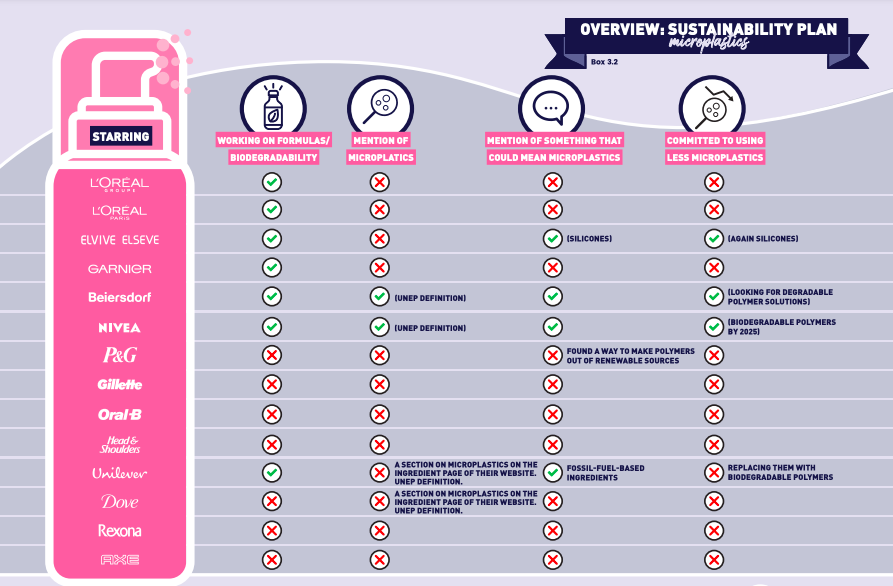 Plastic Soup Foundation highlighted in its report that a new legislation by the European regarding the entry of cosmetic brands in the region ‘will only address a fraction of the problem if it does not cover all types of microplastics’.

Madhuri Prabhakar, campaigner Beat the Microbead commented: “We want to encourage policy makers to use the new EU legislation to put an end to all deliberately added microplastics once and for all. We also want to urge the cosmetics industry to guarantee the safety of the ingredients used for both the environment and public health.”

Cosmetics Europe, the trade association for the cosmetics and personal care industry in Europe, debunked Plastic Soup Foundation’s claims in a statement, saying that: “Plastic Soup Foundation refers to biodegradable polymers. From a scientific point of view, the biodegradability thresholds for polymers proposed by ECHA are considered very stringent and the polymer biodegradability assessment ECHA recommends uses internationally ratified test methods (such as OECD test guidelines 301 B, C, D, F). In its report, Plastic Soup Foundation also refers to nanoplastics. It is important to point out that all nanomaterials used in cosmetic products, including plastics fulfilling the criteria of a nanomaterial definition, are already regulated under the EU Cosmetic Products Regulation (EC) No 1223/2009. For example, nanomaterials need to be notified to the European Commission via the Cosmetic Product Notification Portal (CPNP). All such materials notified up till now to the CPNP have been subject to the safety review by the European Commission’s Scientific Committee on Consumer Safety (SCCS).”

“The Plastic Soup Foundation’s traffic light system is based on a microplastic definition rejected after expert scrutiny in the light of the evidence, and therefore highly misleading to consumers. It is not possible to assume an ingredient is a microplastic by simply referring to the ingredients INCI list – this point is also emphasized by ECHA3. Plastic Soup Foundation is more interested in unduly alarming consumers than providing them with meaningful information,” it added.

The anti-plastic campaigner pointed out that underlying the new European legislation is an opinion from the European Chemicals Agency (ECHA), released in February 2021 which expects to achieve a 500,000 tonne reduction of microplastics in the environment over the next 20 years.

While this is commendable, Plastic Soup Foundation’s Head of Programs Jeroen Dagevos expressed that: ‘It is disappointing that the vast majority of all synthetic polymers will not be considered microplastics if ECHA’s proposal is adopted by the European Commission. This could lead to greenwashing because products could be falsely claimed to be plastic-free.’

ECHA has not included all synthetic polymers in the definition of ‘microplastics’ according to the environmental group. Plastic particles smaller than 0.1 micrometers are excluded from it as well as water-soluble, semi-liquid and liquid polymers are excluded.

Dubai schools respond to Dubai Can with more refilling stations

Cigarette butts among the most littered in Dubai streets, beaches