Here, there, and everywhere. No place is safe from plastic pollution.

In a report published in the journal Science, researchers show that even the most isolated areas in the United States—national parks and national wilderness areas—accumulate microplastic particles after they are transported there by wind and rain.

After collecting rainwater and air samples for 14 months, researchers calculated that over 1,000 metric tons of microplastic particles fall into 11 protected areas in the western US each year. That’s the equivalent of over 120 million plastic water bottles.

Most of these plastic particles are synthetic microfibers used for making clothing. These findings should underline the importance of reducing pollution from such materials.

“We just did that for the area of protected areas in the West, which is only 6 percent of the total US area,” says lead author Janice Brahney, an environmental scientist at Utah State University. “The number was just so large, it’s shocking.”

It further confirms an increasingly hellish scenario: microplastics are blowing all over the world, landing in supposedly pure habitats, like the Arctic and the remote French Pyrenees. They’re flowing into the oceans via wastewater and tainting deep-sea ecosystems, and they’re even ejecting out of the water and blowing onto land in sea breezes. And now in the American West, and presumably across the rest of the world given that these are fundamental atmospheric processes, they are falling in the form of plastic rain—the new acid rain.

Plastic rain could prove to be a more insidious problem than acid rain, which is a consequence of sulfur dioxide and nitrogen oxide emissions. By deploying scrubbers in power plants to control the former, and catalytic converters in cars to control the latter, the US and other countries have over the last several decades cut down on the acidification problem.

But microplastic has already corrupted even the most remote environments, and there’s no way to scrub water or land or air of the particles—the stuff is absolutely everywhere, and it’s not like there’s a plastic magnet we can drag through the oceans.

What makes plastic so useful—its hardiness—is what also makes it an alarming pollutant: plastic never really goes away, instead breaking into ever smaller bits that infiltrate ever smaller corners of the planet.

Even worse, plastic waste is expected to skyrocket from 260 million tons a year to 460 million tons by 2030, according to the consultancy McKinsey. More people joining the middle class in economically-developing countries means more consumerism and more plastic packaging.

To quantify just how bad the problem has become across the American West, the researchers used collectors in 11 national parks and protected areas, sampling both rain and air. Each had a “wet” bucket to collect rainwater, and a “dry” bucket to collect air. A sensor would detect rainfall and open up the “wet” bucket while closing the dry one. And vice versa when it’s sunny out, so the dry bucket would collect microplastic particles carried on the wind while the wet bucket stayed shut. The researchers also modeled where each particular storm they collected rain from had originated, looking at the size of the cities it traveled through before dumping water, and microplastics, into the wet bucket.

Overall, they found that a stunning 98 percent of samples collected over a year contained microplastic particles. On average, 4 percent of captured atmospheric particulates were actually synthetic polymers. The particles that fell in rain were larger than those deposited by wind—lighter particles are more easily caught up in air currents. Microfibers, from sources like polyester clothing, made up 66 percent of the synthetic material in wet samples and 70 percent in dry samples. “I was just completely floored to see little brightly-colored pieces of plastic in nearly every single sample,” says Brahney. Plus, the team wasn’t able to count clear or white particles and fibers with their equipment, so their tally is likely conservative. 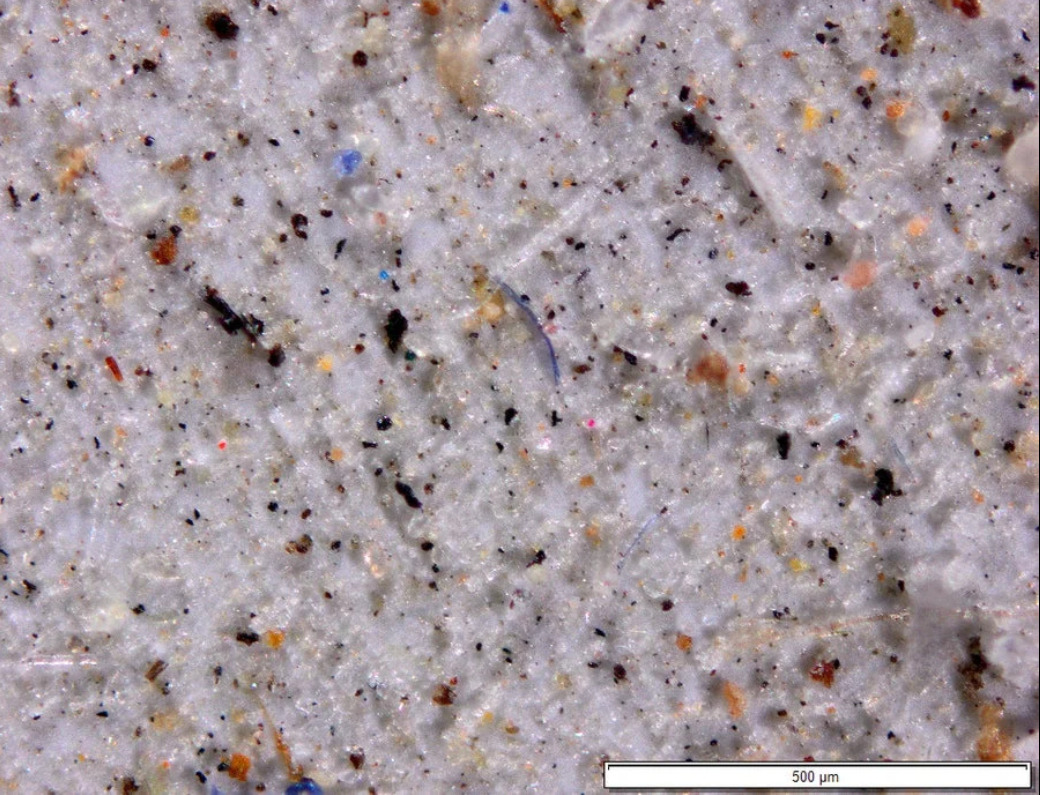 Looking at the path of the storms that deposited the wet microplastic samples, Brahney and her colleagues were able to map how weather systems transport the particles. Winds, for instance, might kick up microplastic particles off the ground in an urban area and carry them downwind before forcing them to the surface once more.

“Rain is very effective at scrubbing the atmosphere of everything that’s in it,” says Brahney. “And so there could be a fair amount of dust and plastics in the atmosphere and a rainstorm will wash those out.”

Microplastic particles could even be acting as condensation nuclei, bits of debris that attract water vapor to form a cloud.

The dry fallout, on the other hand, appears to be traveling longer distances. These particles’ smaller size indicates they’re more easily carried on winds for hundreds, maybe thousands of miles—consider that dust from the Sahara readily blows across the Atlantic and falls in the Amazon rainforest—instead of getting caught up in storms, a more regional phenomenon. And microplastics are probably traveling even farther than soil particles because they’re far less dense.

“We saw relationships to the location of the jet stream, which implies that the air masses that are controlling deposition are really high in the atmosphere,” says Brahney. (In the US, the fast-moving jet stream runs from west to east across the continent.) This jibes with what other scientists are starting to see elsewhere around the world: Tiny pieces of plastic—largely synthetic fibers from clothes—are getting caught in the wind and spread far and wide, tainting formerly pristine habitats. For example, the cities of Europe seem to be seeding the Arctic with microplastic.

This new research comes with another troubling surprise: 30 percent of the sample particles were microbeads, tiny synthetic spheres that the United States banned from beauty products in 2015. The microbeads in the samples, though, were generally smaller than the ones you’d find in those products. “We did see a lot of brightly-colored microbeads, in all colors of the rainbow, and some of those we identified as acrylic,” says Brahney.

That leads the researchers to speculate that the microbeads are coming from industrial paints and coatings. If these are sprayed, they could easily spew the microbeads into the atmosphere, where they’d be picked up by winds and carried afar. If that’s indeed the case, the paint industry may be in for the same kind of microbead reckoning that sullied the beauty industry. Still, if one country bans microbeads in paints, the stuff could well blow in from a neighboring country.

More troubling still, microplastics eventually break into nanoplastics, bits so small that researchers may not be able to detect them without the right equipment.

“I couldn’t see anything smaller than four microns, but that doesn’t mean it wasn’t there,” says Brahney. “Just because we can’t see them in front of us, doesn’t mean we’re not breathing them in.”

Scientists don’t yet know what inhaling microbeads might mean for human health, but it’s reasonable to assume it’s not beneficial. Bits of plastic tend to leach their component chemicals over time, and have been known to transport microbes like viruses and bacteria. Researchers are just beginning to explore what this means for other organisms: One study published earlier this year found that hermit crabs exposed to microplastics have difficulties choosing new shells as they grow, a particular problem since they need those shells to survive. 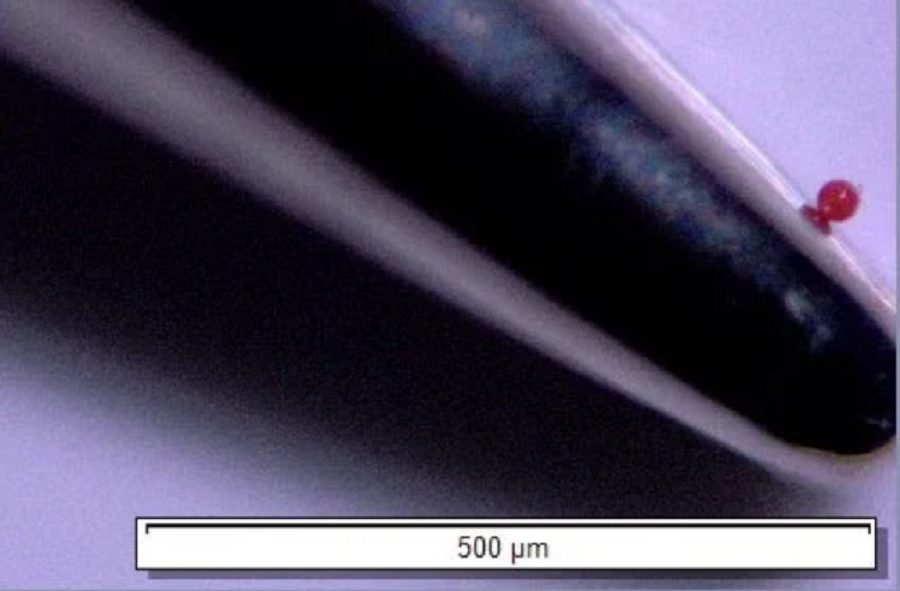 In the soils of America’s national parks, the arrival of plastics could have cascading effects. “These can not just block up the digestive tract of small animals, like worms,” says University of Strathclyde microplastic researcher Steve Allen, who wasn’t involved in the new study. “But it’s also the chemicals that are on these plastics and in these plastics that can have an effect on the soil. A lot of that is still theoretical—we’re still trying to work it out.”

Brahney and her colleagues note that microplastics may be changing the thermal properties of soil, for instance, altering how it absorbs and stores heat. They may also lead to the growth of more or less of the microbes that normally live there, rearranging communities and altering the way the dirt cycles nutrients. Microplastics may also change how water moves through these soils.

But setting these many remaining unknowns aside, this research puts in place a critical piece of the puzzle regarding the microplastic life cycle, which grows increasingly complex with each new study. Scientists have been trying to figure out what happens to the world’s plastic pollution, nearly all of which seems to “disappear” in the environment. But studies like this one are showing that the stuff never truly goes away, it just gets shredded into smaller bits that disperse all over the world, perhaps spending many years cycling through different systems—air, land, and sea.

Scientists have discovered, for instance, that currents are carrying microplastic particles into deep-sea ecosystems—when the currents slow, the suspended particles fall out and settle on the seafloor.

“Deep sea currents basically behave in the same way as atmospheric currents do,” says University of Manchester earth scientist Ian Kane, who was lead author on that study, but wasn’t involved in this new work. “They’re part of a global re-circulation pattern, and the particles are transported according to the shape and the density. And so it’s the same process. What these authors found is that the heavier particles tended to fall out in the wet conditions.”

Other research published last month by Steve Allen and his spouse Deonie Allen, also a microplastic researcher University of Strathclyde, found that the oceans are burping up microplastic particles, which then float onshore on sea breezes. Previously, it was believed that when microplastics flowed into the sea via wastewater, they’d stay there. So it may also turn out that microplastics landing on soil are also not staying put.

“It may not be static,” says Deonie Allen. “It’s not going to just sit. Some of it ends up going down through our water table, some of it moves because of erosion, or gets rereleased back into the atmosphere.”

There’s still much that science has to learn about this microplastic cycle, but this much is clear: there’ll be no putting the plastic back in the bottle.

People in the UAE pledge to reduce food waste

Food waste being digested in Dubai