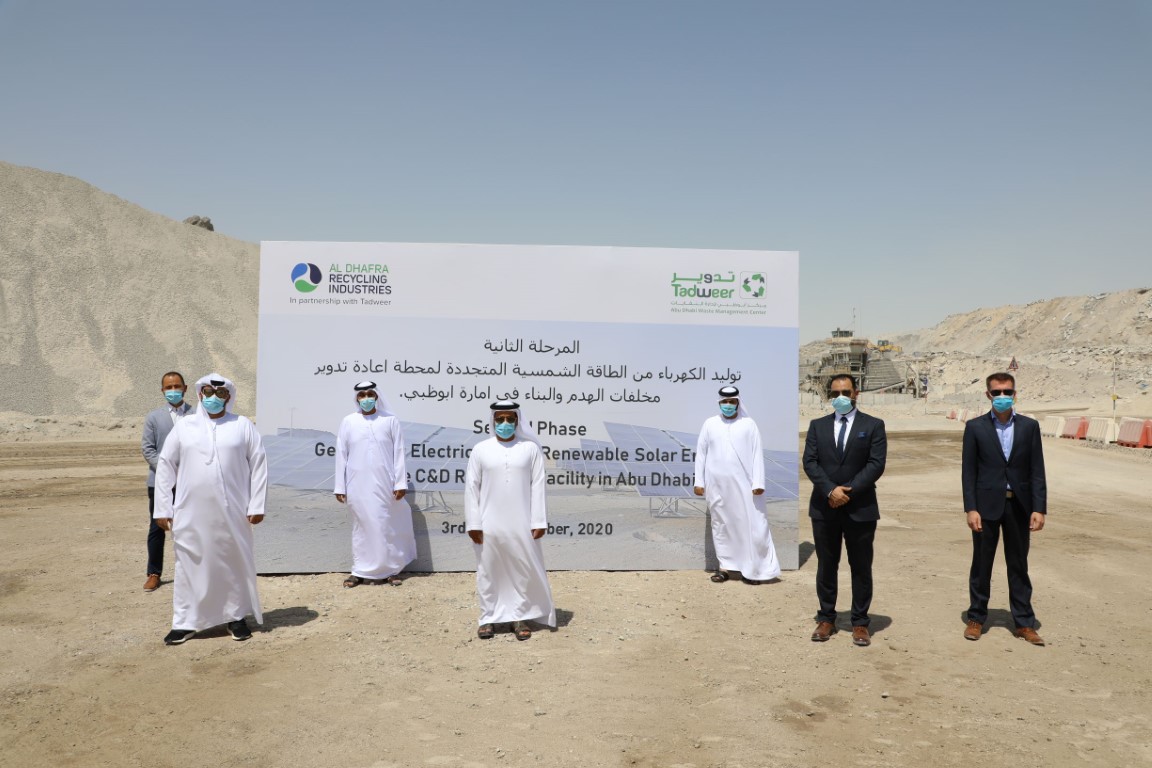 The Abu Dhabi Waste Management Center, Tadweer, announced the opening of the second phase of the solar power plant project at the Construction and Demolition Waste Recycling Facility in Al Dhafra region of Abu Dhabi.

Aimed at lowering the facility’s carbon footprint, Al Dhafra C&D Waste Recycling Facility, the first of its kind in the world to be 90 percent solar-powered, is aligned with the country’s ambitious plans to mitigate climate change including the UAE Green Agenda Programs (2015-2030) and the National Climate Change Plan of the UAE (2017–2050).

With the completion of the second phase, Tadweer, in close coordination with the investor of the Al Dhafra C&D Waste Recycling Facility, has significantly enhanced the facility’s solar energy utilisation by increasing its capacity to 600 kilowatts per hour, up by 350 kilowatts per hour.

In addition to enhancing the facility’s operational efficiency, the increased capacity will help lower its carbon footprint by avoiding more than 1,300 tonnes of carbon emissions, equivalent to planting 4,133 trees and saving 480,000 litres of diesel on a monthly basis. This will significantly contribute to protecting the emirate’s environment and cutting harmful emissions.

To raise the efficiency of the power plant, Tadweer installed 1,656 solar cells at an area covering 11,000 square metres, with a capacity to produce a total 600 kilowatts, equivalent to generating 878,000 kilowatts energy from diesel, saving an annual diesel consumption of up to 480,000 litres. This will help prevent an average of 1,300 tonnes of carbon emissions per year.

“At Tadweer, we are committed to working with all relevant entities to achieve the objectives of National Climate Change Plan and foster the emirate’s sustainable economic growth,” Al Kaabi added.

Opened in Ghayathi, Al Dhafra in 2008, Tadweer’s Al Dhafra C&D Waste Recycling Facility articulates the ambitious plans of Abu Dhabi Government to divert 75 percent of waste from landfills, and use C&D waste in the construction of vital projects across the country.

This article originally appeared on wam.ae