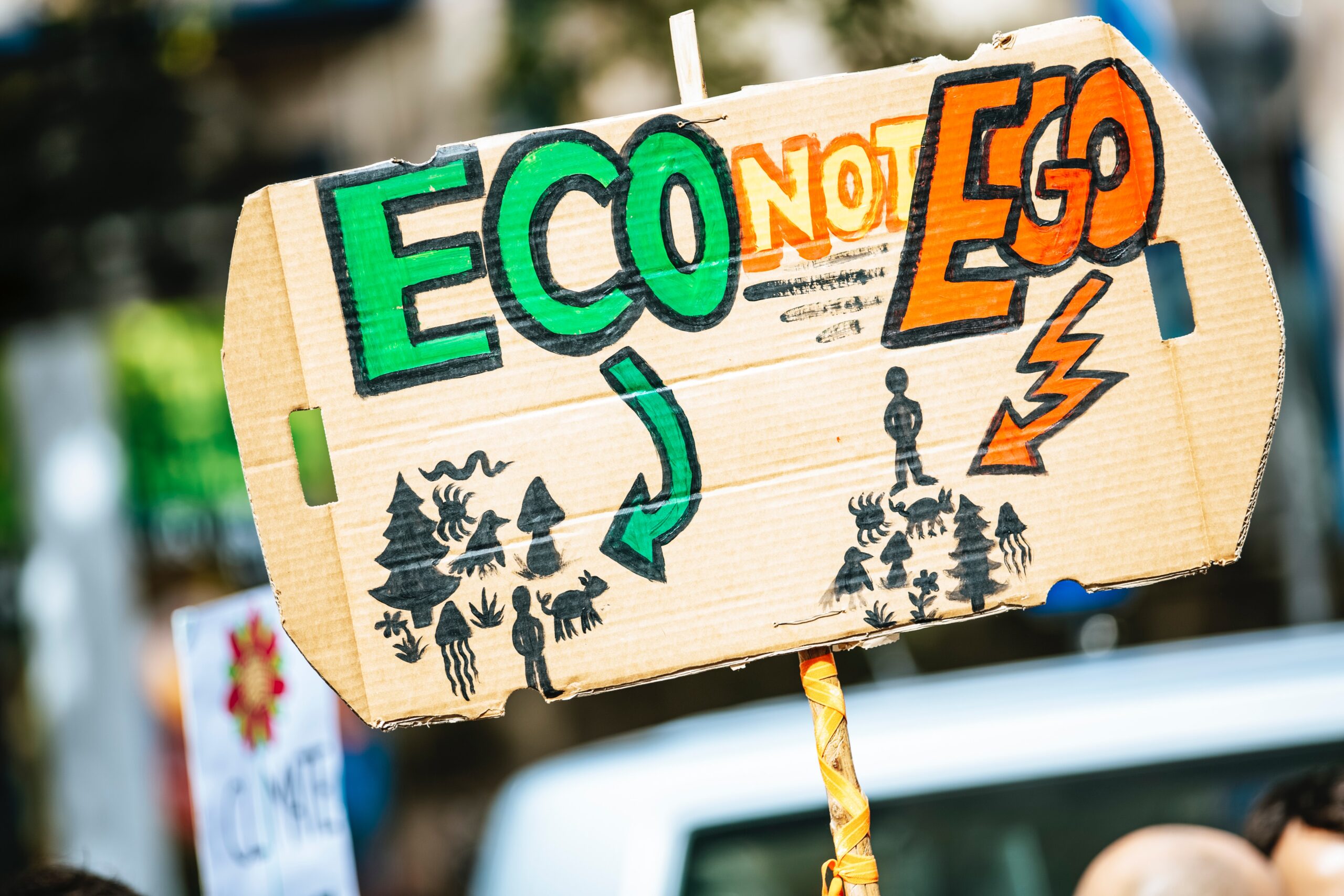 What’s the point in me studying anything? Why should I be thinking about going to university when I don’t know that I’ll be able to get a job, or even live in a world where there are jobs anymore?’

When Dubai-based mother Tatiana Antonelli-Abella’s middle son expressed himself like this at the age of 11, she knew she had to take it seriously.

As the founder of Goumbook – a social enterprise dedicated to sustainability and green living in the UAE and beyond – Tatiana has spent years spurring people into action against climate change and warning about the seriousness of the consequences if we don’t.

And, as a mother of three boys (now aged seven, 14 and 16), sustainability permeated every aspect of her parenting, so it was a message she naturally passed down to her children – through their weekly family beach clean-ups, the fact that they were never allowed to use plastic bags or straws, and their participation in regular desert-tree-planting activities, among many other things.

But on hearing this sense of doom and gloom from her middle son – the ‘sensitive one’, who was perhaps more affected by her rallying cries than her other children – Tatiana realised that her awareness-raising had gone too far.

‘To begin with it was just silence and sad faces and not wanting to come to the tree plantings or listen to my information about climate change and sustainability anymore,’ she says. ‘It seemed they had just had enough of worrying about the state of the planet.

‘I didn’t understand at first and I thought they were just bored. But when my middle son, the one who tends to be more open emotionally, explained to me how depressing they found the whole topic of global warming and its negative impact, how it made them sad and feel as if they couldn’t do anything about it, I realised I needed to change the way I was talking about it and what I was allowing them to be exposed to.’

There’s a name for this sense of hopelessness Tatiana describes in her children, and it’s a swiftly rising phenomenon that’s worrying parents and psychologists across the globe.

‘Eco-anxiety’ is a serious new condition gripping young people all over the world, leaving them panicky, terrified, and depressed about climate change and the future of planet Earth.

New research by medical journal The Lancet suggests that our efforts to raise kids’ awareness about sustainability have been so effective that they’ve led to a chronic fear of environmental doom that is negatively impacting teens’ and children’s ability to live their lives.

A 2021 survey of 10,000 children and young people (aged 16–25 years) in ten countries (Australia, Brazil, Finland, France, India, Nigeria, Philippines, Portugal, the UK, and the USA) found that more than 45 per cent of them felt their worries about climate change negatively affect their daily life and functioning, and many reported a high number of negative thoughts about climate change. A staggering 75 per cent said that they think the future is frightening and 83 per cent said that they think older generations have failed to take care of the planet.

Inspired and spurred on by climate-change-activism poster girl Greta Thunberg – who first hit headlines in 2018 at the age of 15 when she protested with a sign saying ‘School Strike for Climate Change’ outside the Swedish parliament, prompting more than 20,000 students across the world to skip school in solidarity – many young people are under pressure to act, but feel they are powerless to do so.

As a result, they’re being overwhelmed by guilt, fear and ultimately depression – or apathy, caused by the belief that it’s too late to make a difference anymore. The indifference of older generations and the inaction from governments also creates a sense of betrayal and abandonment. Add to this the growing awareness and news coverage of the climate crisis across the world – including the publication of panic-inducing research like the April 2022 United Nations report, in which scientists state that carbon emissions are at an emergency level and ‘the world is on a “fast track” to disaster’ – and it’s little wonder that children’s and teens’ anxiety is growing.

First described by the American Psychiatric Association in 2017, recognition of Eco-anxiety and its complex psychological responses is increasing, as is its disproportionate impact on young people.

Professor Mala Rao and Richard Powell, both members of the Department of Primary Care and Public Health at Imperial College London in the UK, say the true burden of Eco-anxiety’s costs and consequences has yet to be estimated, but is likely to be significant and potentially damaging to individuals and society.

‘Evidence points to a clear relation between experiencing climate change effects [such as floods, droughts and climate-change impacts on physical health, such as heat-related stress, asthma, allergies and vector-borne illness] and the increased risks of depression, low mood, extreme mental distress, post-traumatic stress disorder, suicide, and further deterioration in those with a history of mental illness,’ say Rao and Powell.

‘Eco-anxiety is not a clinical diagnosis but refers to anxiety, sometimes acute, related to fears about the environment and climate change,’ explains Dr Rose Logan, clinical psychologist at Genesis Healthcare Center in Dubai.

While we can all identify with the fear of climate change to some extent, it’s Generation Z and their future offspring who are really staring down the barrel of the climate change gun.

‘Young people tend to be aware of the potential outcomes and consequences of climate change and environmental issues and fear what that means for them and their futures,’ she says. ‘In essence, all anxiety is the same. What differentiates Eco-anxiety from other types of anxiety is the focus of the individual’s thoughts, feelings and behaviours on topics relating to climate and environmental issues – something that can be hard to avoid when it’s all over the news, in the media and often what everyone is talking about.

Dr Logan says she has come across several cases of Eco-anxiety in her own practice in Dubai – usually in younger teenagers. ‘They may present with a passion for the environment and nature which is healthy and well informed. It then becomes apparent that there is a fear driving their interest and causing them anxiety.’

Perhaps the most famous victim of Eco-anxiety is Greta Thunberg herself. Before embarking on her school-strike activism, her father Svante Thunberg told the BBC she suffered from depression for several years, stopped talking, going to school and began refusing to eat.

Greta’s parents helped her through it by researching climate change with her, making changes in their own lives (like no longer flying and becoming vegan), and ultimately allowing her to become the public-eye campaigner that she was set on being, despite their reservations.

While Mr Thunberg says Greta has become ‘very happy’ as a result of her activism, not every Eco-anxiety sufferer is able dedicate their lives to the climate-change cause in the same way.

Megan Morgan, 25, who was born and raised in England, told France 24 that she remembers dealing with difficult emotions prompted by climate change as early as age seven. ‘One day, a team came in to talk about climate change, landfills filling up and ice caps melting. That was the moment I became aware of my own mortality. It was an earth-shattering moment for me.’

After that day, Morgan experienced an onset of panic attacks. ‘Every time it rained or flooded I would be inconsolable,’ she says. ‘I couldn’t even hear the words ‘global warming’ without having a sinking feeling.’

Today Morgan still suffers from climate anxiety but she says it feels more like stress. What she struggles with the most, though, is feeling helpless. ‘Sure I can use a metal straw, eat vegan or make ethical choices when shopping. But compared to oil being poured into the oceans, it’s a minuscule effort. There’s no accountability, no change made.’

All of this brings us to tricky situation. Given the seriousness of the climate crisis, many parents and educators feel they have a responsibility to teach children about the topic. But how can we do this without causing undue worry that could turn into harmful anxiety?

‘We should absolutely not shy away from education and information around the environment,’ Dr Rose Logan explains. ‘Providing this in an age-appropriate manner is the primary consideration.

Focusing on the constructive side of the conversation is exactly what Tatiana decided to do with her own children.

‘I realised they’d been hearing too much about the climate crisis from me at home. I needed to show them the positive aspects, the good news, that there are amazing technologies and people investing millions in solutions.’

Tatiana’s efforts have paid off and her sons’ Eco-anxiety has reduced to more moderate, manageable levels. Her children are now not only engaged in the sustainability conversation in a more healthy way, but in some ways have become more ‘radical’ than her.

She says her oldest son has decided he doesn’t want to learn to drive a car due to the carbon footprint, and all three of her boys are quick to refuse plastic straws with a drink in a restaurant, or to pick up rubbish if they spot it on the beach.

Instead of apathy and reluctance, or paralysing anxiety, they are engaged in the solution. Tatiana says: ‘Now they are very glad and proud when they see the whole world waking up to the cause, and bigger campaigns starting, and governments taking action,’ says Tatiana. ‘They realise the bigger purpose.’

How to spot the signs of Eco-anxiety?

How to help an Eco-anxious child

Does Your Child Have Eco Anxiety?This article was first published by Holly Catling for The Ethicalist