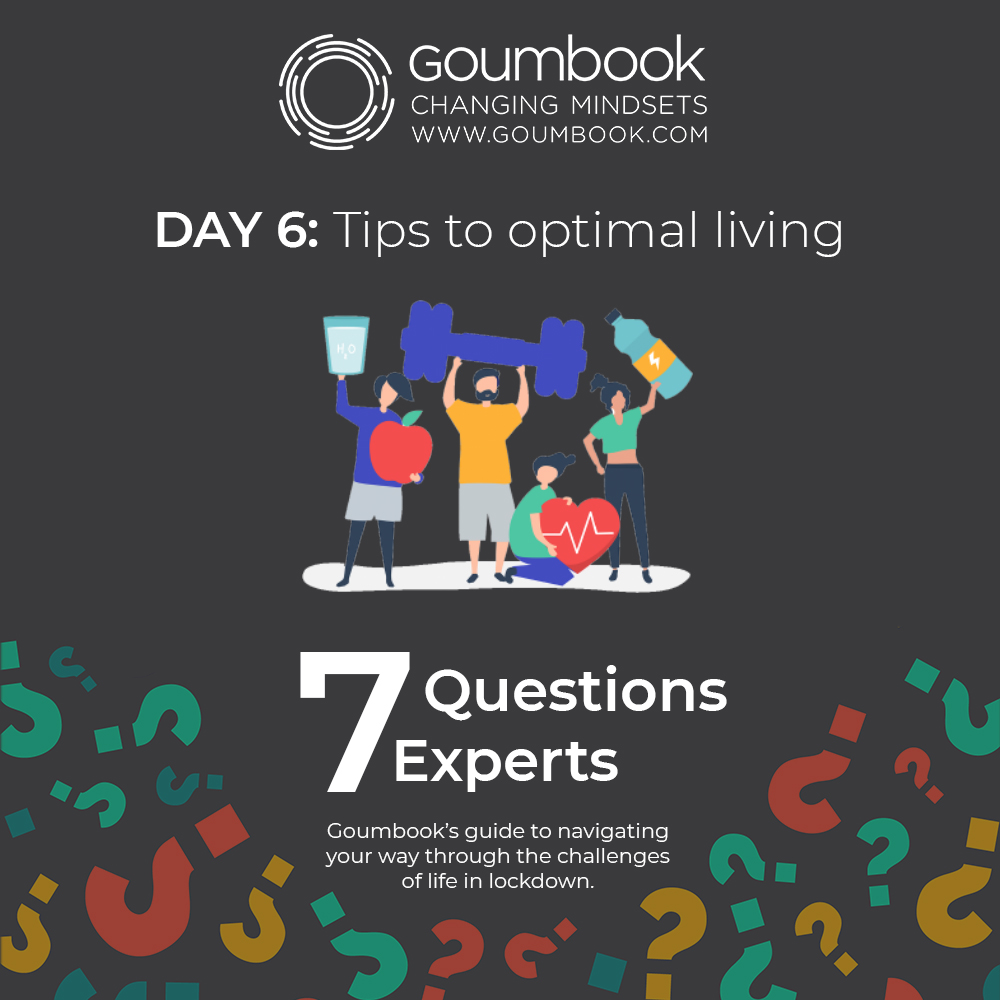 Welcome to day 6 of  ‘7 Questions for 7 Experts’, Goumbook’s guide to navigating your way through the challenges of life in lock-down, dedicated to bringing positive and supportive information during these difficult times.

Welcome to day 6 of  ‘7 Questions for 7 Experts’, Goumbook’s guide to navigating your way through the challenges of life in lock-down, dedicated to bringing positive and supportive information during these difficult times.

As we settle into this new rhythm of remote work and isolation, we ask one expert every day to help us address specific questions we might need help with.

The world has plunged into uncertainty due to the Coronavirus and the constant news about the pandemic can feel relentless. Self-isolation as well as working from home whilst attempting the precarious daily challenge of home-schooling kids can take its toll on our mental and emotional well-being.

There is a huge rise in people looking for alternative advice on health, this is why we reached out to Dr Nasr Al Jafari, Medical Director, Functional medicine, DNA Health and Wellness. Although a medical Dr he quickly became disillusioned in mainstream medicine by the perpetual cycle of sicker patients and more medications. This led him to finding the root causes of diseases, and the underlying importance of lifestyle in the etiology of modern illness. Functional medicine, in its simplest definition, treats the person who has the disease, not the disease the person has and is holistic in how it views patients and the problems they present with.

In an ideal world, we would all get the required 7-8 hours sleep a night, eat healthy foods, with lots of fruits and vegetables, and exercise daily. In these challenging times our routines have been turned upside down so how do we still maintain some kind of optimal health, what supplements can we take and instead of reaching for the pain killers and traditional medicines, read on to find out.

As always, we welcome your feedback, connect with us and others by sharing your stories.

Be safe and stay healthy!

I would have to say that the association of lack of sleep with immunity stands out for me. Studies show that people who don’t get the right amount of good quality sleep are more likely to get sick after being exposed to a virus, with the risk increasing after just one night of poor sleep. Lack of sleep can also affect how fast you recover if you do get sick. Bearing in mind that adults should be getting 8-to-9 hours of sleep and the average adult is now only getting 6.5 hours. To that end, conversely, making sure you have a non-negotiable attempt at 8-hrs good quality sleep every night will optimize your immune response to any external aggressor.

2/ If we look at the alphabet of vitamins and minerals available; a, b, c, d and the list continues, which ones would you recommend and why as the most essential, particularly now when we want to keep our immune system healthy? Or would you suggest just a one a day multivitamin?

It is difficult to single out a particular vitamin or mineral, as in reality, any deficiency – and anecdotally from my clinical practice, deficiencies on an individual level are ubiquitous – is likely to compromise your immunity.

In terms of those which have some evidence in either reducing the chances of developing an infection and/or speeding up the resolution of a viral illness, the three that stand out for me are:

Zinc: 50mg and above per day (short term)

3/ Can we overdose on vitamins i.e. can we take too many? What should we look out for on the labels, can you recommend some good brands?

Yes – there is such a thing as ‘too much of a good thing’ and it’s a common misconception that you cannot cause harm with vitamins and minerals. Whilst the risk is very low if taking regular supplements as advised, many people often take over-lapping supplements or take dosages way above their required amounts.

In general, lifestyle will always trump supplementation. That being said, living an optimal lifestyle is a challenge in the modern world. As a result, in my experience, I have found that the vast majority of people have at least one or two nutritional deficiencies, many of which are not routinely checked for (e.g. zinc, selenium, magnesium, vitamin c).  So, on a very basic level, we employ comprehensive testing with our clients and make sure that there are no nutritional imbalances by utilize targeted nutritional supplementation.

As will all supplements, because it is an unregulated industry, it is important to stick to brands recommended by a professional or those that are independently laboratory tested by third party agencies (e.g. NSF and USP). 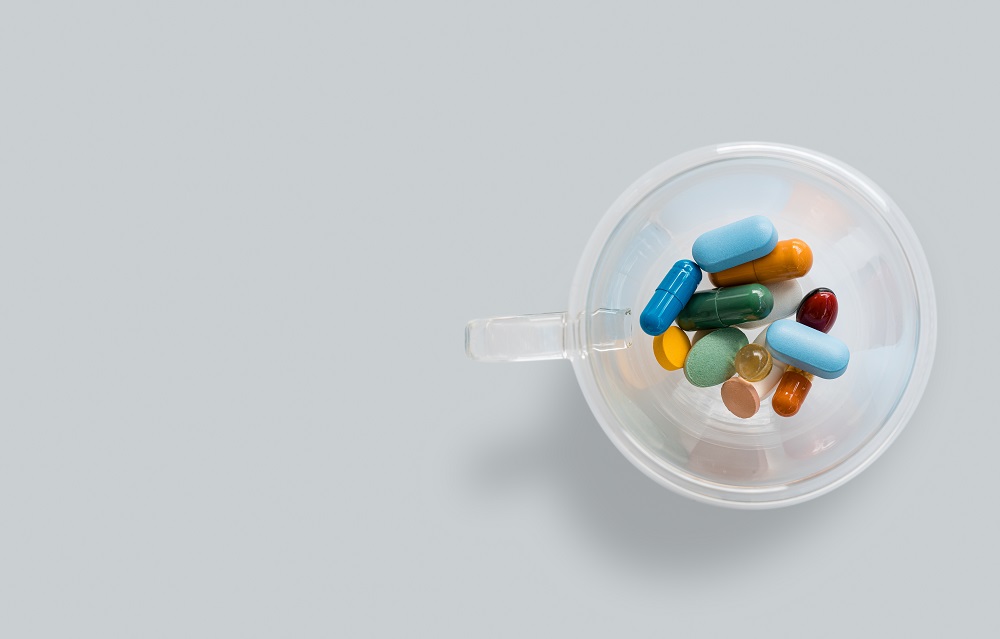 4/ I keep hearing that elderberries are good for immunity; Hippocrates called the elder tree his ‘medicine chest’ because of its endless healing properties and uses.  What are your thoughts on this? And what about Echinacea?

Folk medicines and herbal products have been used for millennia to combat a whole range of ailments. Elderberry is one of those. It exerts its antiviral activity on influenza through a number of mechanisms of action, including suppressing the entry of the virus into cell, modulating the post-infectious phase, and preventing viral transmission to other cells. It is definitely an accessible low risk addition to your ‘flu fighting’ arsenal

Echinacea has been extensively studied for its ability to support the immune system, prevent viral replication and regulate switching certain genes on and off. The benefits of Echinacea products depend on the parts of the plant used, the standardized compounds and the overall formulation. Combining Echinacea with other ingredients may also offer greater advantage (see below).

Dosing recommendations for Echinacea vary widely, depending on the preparation, standardization, formulation, delivery method, and intended purpose. Dosages are generally lower for ongoing support and higher for temporary support. Notably lower dosages of Echinacea appear to be effective when it is combined with other herbal compounds, for example: Thuja, Baptisia, Rhodiola, Cordyceps, Reishi Mushroom.

5/ Thankfully we live in a wonderfully sunny place, should we still be looking at taking vitamin d or is it enough just to try to spend some time out-doors every day, bearing in mind that many of us will be spending much more time indoors these days?

Ironically the levels of vitamin D deficiency are higher in the UAE compared with many places, particularly in the Summer months, due to cultural practices and because people spend more time in air-conditioned environments.

Vitamin D supplementation is essential for most people but it’s certainly no substitute for regular healthy UV light exposure. I would encourage people to try and achieve at least 15 minutes during the late morning or early afternoon (taking precautions not to burn).  Being out in nature, connected to the earth and exposed to the sun are proven methods of enhancing immunity, none more so than reducing stress and enhancing stress resilience, thereby improving immune system regulation.

6/ There is a lot of confusion right now about taking paracetamol and Ibuproufen, what is the difference and when should we be taking them, if at all? What is herd immunity, how does it work?

Paracetamol is a medication which works centrally in the brain to help reduce fever and pain. Ibuprofen is a type of anti-inflammatory which works on moderating the immune system’s response to an infection or trauma.

There were recent anecdotal reports which originated in France describing poorer outcomes for some people who had been taking ibuprofen as a remedy. Up until now, there is not reliable evidence to suggest that this is the case, but the general advice is to avoid ibuprofen until more is known.

The concept of herd immunity is usually applied to the usage of vaccines and works on the principle that if enough people are immunized against a disease then the virus or bacteria cannot find enough hosts to infect and replicate, therefore the pathogen eventually dies out.

The same principle has been spoken about by some in respect to tackling the Sars-Cov2 (COVID-19) virus. If enough people are infected, then again, there are not enough hosts for the virus to infect and survive. The figure spoken about is usually around 60-to-70% of a population to be infected in order to achieve ‘herd immunity’ status.

7/What is the one thing you do each day that makes your life more sustainable?

I live in The Sustainable City in Dubai, so my community has been built around sustainability at its core. To name a few sustainable daily practices, our waste is recycled, electricity is solar powered, we grow our own organic vegetables locally, and we use ozone water to clean and disinfect. 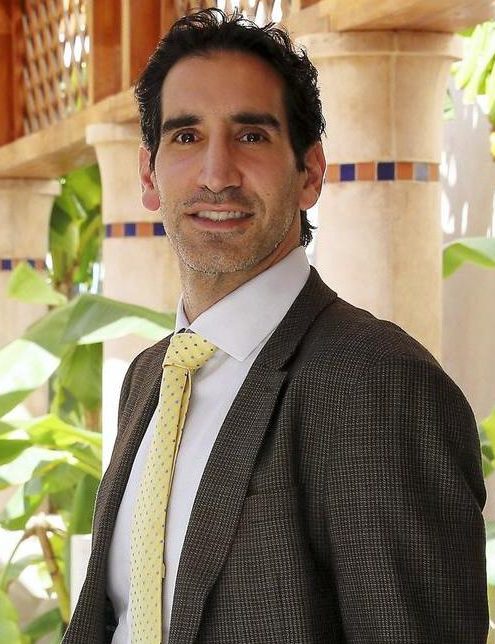 Dr Al Jafari is originally from the UK where he worked as a Consultant Physician and Member of the Royal College of General Practitioners. Having moved over the UAE in 2015 and based now in Dubai, he is currently the Medical Director of DNA Health Clinic.

Dr Al Jafari’s particular focus is in modifying lifestyle factors, optimizing long-term health and prevention of chronic disease. He offers a broad scope of cutting-edge treatment strategies for both adults and children, ranging from diabetes and obesity through to autism and dementia.

‘The Doctor of the future will give no medicine, but will instruct his patients in lifestyle and in the cause and prevention of disease‘

Disclaimer: the information shared on this website is for your general knowledge only. The website cannot, and is not intended, to replace the relationship you have with your health care professionals.

What is the future of communities after Covid-19?