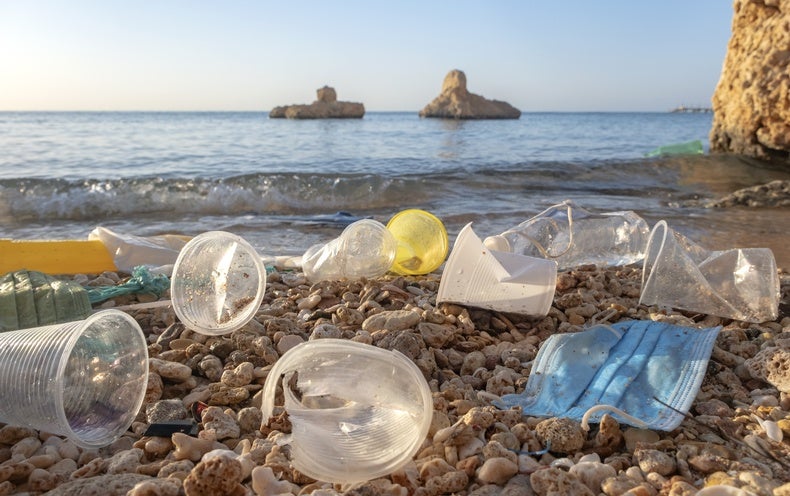 My entry into the ocean plastics crisis began when our organization, SoulBuffalo, ran the first ever activist-to-industry ocean plastics summit in May of 2019. To imagine the summit, picture 165 senior leaders from Coca-Cola, Dow, Greenpeace, the American Chemistry Council, the World Bank, World Wildlife Fund (WWF) and representatives of some of the world’s 15 million informal waste pickers all stuck on a boat together in the middle of the Atlantic Garbage Patch for four days.

These stakeholders have wildly different strategies, visions and objectives. Our mission was to bring them together in the heart of the crisis to ignite new relationships and accelerate action. We snorkeled together in a sea of plastics and hosted boundary-pushing conversations between leaders that don’t usually sit in the same room.

We saw up close the paradox of plastic, part wonder material, part environmental scourge. Lightweight and strong, plastic preserves food like no other material. Yet it breaks down into microplastics and nanoplastics, which can now be found everywhere in the world—from the deepest oceans to our very own bodies.

Every day plastic is flowing into our natural environment at an unprecedented rate—a dump truck’s worth every minute into our oceans alone. As I wrote in Scientific American in August, the pandemic has made it worse. Enough masks are being made per year to cover the entire country of Switzerland.

Confronting this reality together in the Atlantic Garbage Patch built bridges between the plastic industry and environmental NGOs. Five of the ideas workshopped during the summit are funded and up and running today (including the Plastic Pickers Operational Working Group). The summit made a powerful impact, but the crisis is far from resolved. The need for a complete overhaul of our broken system for managing waste is clear. The growing consensus is that the most effective way to do this is through a U.N. Global Treaty on Plastics. In 14 months at United Nations Environmental Assembly’s Fifth Session (UNEA-5), the U.N. will decide on whether to move a treaty forward.

The 70-plus-member Ocean Plastics Leadership Network, the activist-to-industry network dedicated to the plastics crisis that was born on that ship in the middle of the Atlantic, is committed to accelerating the work towards a “Paris Agreement” for plastics.

We are currently at work on a yearlong series of virtual dialogues during the 14-month groundwork period leading up to the UNEA5 decision in February 2022 on whether to develop a global plastics treaty. Our role is to help map consensus amongst major stakeholders to accelerate a plastics treaty.

Traditionally, negotiations on global treaties are incredibly hard, and the vast number of stakeholders in the global plastics crisis only adds to the complexity of the task.

Among the stakeholders for a new global agreement on plastic pollution are 193 U.N.-recognized governments; thousands of companies dependent on plastic; trade and advocacy groups; activists and industry-facing nonprofits; waste pickers in the developing world who are responsible for picking plastic out of landfills and off beaches; and seven billion consumers who recycle on average 14 percent of the total amount of plastic they consume.

We’re under no illusion about the scope of this challenge. We must create a safe forum for tough conversations to take place among this vast and varied group in advance of the February 2022 decision to inform negotiators at the U.N. and help advance the treaty. In the words of Costa Rican diplomat Christiana Figueres, who was central to the realization of the Paris Agreement, we must employ “relentless optimism,” coupled with “radical collaboration.”

Despite this complexity, we believe a meaningful global agreement can be reached and that we must make it happen faster than any treaty before. There are good reasons for optimism. In 1988, the International Maritime Organization ratified a global agreement titled MARPOL Annex V making it illegal for ships to dump plastic in the ocean anywhere in the world. It is still in effect today, proving there’s precedent for global agreements to preserve our oceans.

All of the Caribbean nations, the Nordic countries and the Pacific Island states have called for a new global agreement. Sixty-eight countries have publicly expressed interest in a plastics treaty, as have a broad coalition of African countries, and the European Union. While the U.S. has been notably silent on the topic, the groundswell of worldwide support is encouraging.

In November, the U.K.’s environmental minister declared the time to start negotiating a plastics treaty is now. “We have a chance now to tackle plastic pollution in the way that the Paris agreement has done for climate change.” said Lord Zac Goldsmith. There is also hope across the environmental community that the recently elected Biden administration will be a meaningful force on the plastics treaty, as the Obama administration was for climate.

Major reports released in 2020 from industry, NGOs and government also provide a useful blueprint to ground discussions. WWF, Ellen MacArthur Foundation and Boston Consulting Group laid out the business case for a global treaty, and 30 major companies have signed onto a “Business Call for a U.N. Treaty On Plastic Pollution.” They urged others to join them in advocating for an international response that aligns businesses and governments and offers a clear approach to addressing the plastic crisis.

Environmental NGO groups also voiced their support for a plastics treaty in a report from the Center for International Environmental Law, the Environment Investigation Agency and GAIA (Global Alliance for Incinerator Alternatives). The report has the backing of the Break Free from Plastic movement and Greenpeace. Finally, just a few weeks ago, the Nordic Council of Ministers rolled out a 148-page report that provides a suggested framework and positioning for a future treaty.

These reports reveal that there is already alignment on some fundamental points. First, they all call for harmonized reporting on plastics throughout their life cycle, making it possible to account for everything that is being made and how it is handled. This requires a standardization of terms for all things plastic, so regions and stakeholders all speak the same language.

Second, all the reports recommend national action plans, where each country sets up its own plans to manage waste based on minimum requirements, much as nations do with greenhouse gas emissions under the Paris accord. Finally, the reports agree that scientific panels should monitor progress globally, and a financial mechanism must support developing countries and distribute funds internationally.

While environmental organizations (like OPLN member Greenpeace) and industry groups (like OPLN member American Chemistry Council) may agree on some of the basic structures of a global agreement there are still challenging issues to address.

Meanwhile, many industry groups believe a treaty can be successful without mandatory reduction goals and heavily emphasize the expansion of advanced recycling or chemical recycling technologies. Many environmental activist groups see the advanced recycling models as a license to continue with the status quo on consumption.

A landmark report from the Pew Charitable Trusts, SYSTEMIQ and various academic partners, titled “Breaking the Plastic Wave,” points toward a way to help bridge this divide: we need to dramatically ramp up both upstream solutions such as reduction goals championed by environmental groups and downstream solutions championed by industry, including fixing our broken mechanical recycling system and investing in new technologies.

How long will bridging this divide take? The road to the Paris Agreement actually began in 1991 with the U.N. Framework Convention on Climate Change, and continued with the Kyoto Protocol in 1997, and the failed meetings in Copenhagen in 2009. The Paris Agreement was finally signed in 2016, 25 years after the first framework was agreed upon.

The Montreal Protocol, which has been instrumental in repairing our ozone layer, was signed in 1987, 14 years after CFCs were posited to pose a danger—speedy by U.N. standards. A high seas treaty to conserve marine biological diversity in international waters has been under discussion for 12 years now.

However, there is a precedent for greater speed when the issue is plastic. The Basel plastic amendments included plastic waste in a legally binding framework to make global trade in plastic waste more transparent and better regulated. This was a major accomplishment, and the time between the first proposal and unanimous adoption by governments was just eight months, previously an unheard-of timeframe in which to negotiate an international agreement.

Reports such as “Breaking the Plastic Wave” tell us we’re running out of time. We must rapidly accelerate both upstream and downstream solutions to have any chance of solving this crisis. If we delay dramatic action by just five years and maintain current government and industry commitments, an additional 80 million metric tons of plastic will end up in the ocean by 2040 (or about half of all the plastic that has accumulated from the start of the plastics era up to now).

Preventing this disaster for ocean ecosystems and human health and well-being requires creating safe spaces for discussion between environmental and industry groups now. The only way forward is to approach the obstacles head-on in the belief that tension equals progress, and that all parties, regardless of their perspective and approach, should have a seat at the table.

If we are brave enough to have those conversations, we have reason to be relentlessly optimistic that an ambitious plastics treaty matching the scale and urgency of the problem can be realized in record time.

This article originally appeared on scientificamerican.com

Dubai Can: why and how to choose the right filtration system for your home

Understanding marine ecosystem: Half of Earth’s oxygen comes from the ocean