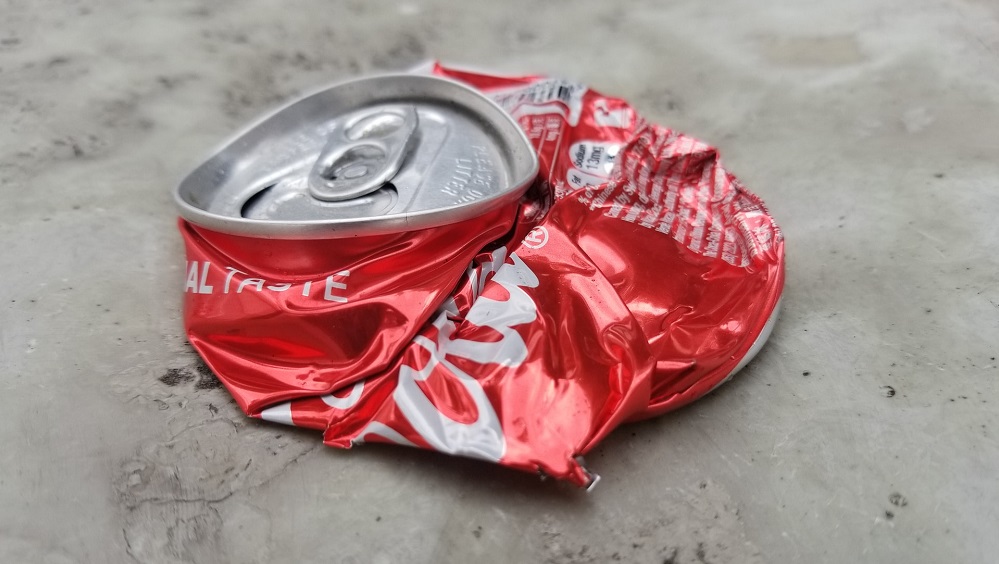 – A circular economy approach could reduce emissions from the production of key materials by 40% in 2050.

– Aluminium – an infinitely recyclable material – can play a big role in this transition.

– Cross-sector collaboration is needed to overcome challenges and make this a reality, however.

As COVID-19 has disrupted lives and economies in an unprecedented manner, societies across the globe are grappling with an immediate need to protect lives and livelihoods, challenging the urgency of the climate agenda. Yet at the same time, some have argued that the pandemic shows how the climate change crisis might affect the global economy. Luiz Awazu Pereira da Silva, deputy general manager of the Bank for International Settlements, has said that the pandemic has intensified the need for policy-makers to co-operate on building more holistic approaches to identifying and managing global risks.

It is not yet fully clear if and how the priorities of policy-makers and business leaders will change, yet the need to lower carbon emissions is likely to remain an urgent priority – especially in light of how vulnerable our society and economies have proven to be to shocks from the natural world. A recent poll conducted in 14 countries found that 71% of adults agree that, in the long term, climate change is as serious a crisis as COVID-19. People do not want to return to ‘how it was’ and are demanding that societies reset in a way that is more secure, inclusive, resilient and safer.

Therefore, governments and businesses that are building global and national recovery plans should take heed and ensure a green recovery. The emphasis on the business sector from an environmental, social and governance (ESG) perspective has grown even stronger over recent years, and did so well before the arrival of COVID-19. This should not change. Whilst business will need to be receptive to these changes, in the long run such changes will eventually make businesses more resilient. 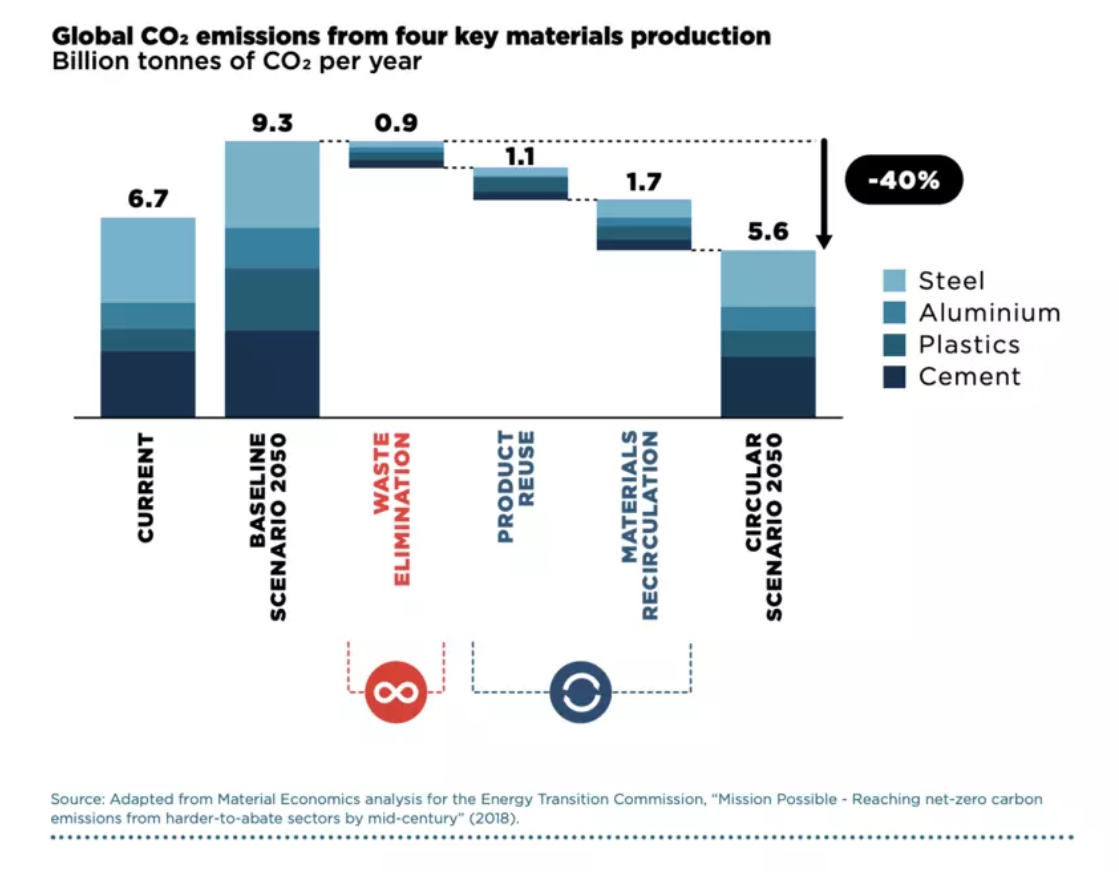 A circular economy could reduce GHG emissions from key materials by 40% in 2050 - Image: Ellen MacArthur Foundation

The transition to the low carbon economy may also be beneficial not just for the environment, but for jobs as well. For example, in terms of employment it has been argued that for every $1m of public funds spent on clean energy and energy efficiency generates 7.49 full-time jobs in renewables infrastructure and 7.72 in energy efficiency, compared with only 2.65 for those focused on fossil fuels. So whilst this transition requires a transformation of unprecedented pace and scale it might also prove to be a better return on investment in terms of jobs, resilience, the environment and political capital.

The good news is that this move towards a circular, low carbon economy has already started. From automotive producers to the packaging industry, many international corporations have already committed to reducing their carbon footprint and have started to look for more sustainably produced material. Demand for key raw materials (aluminium, plastic, concrete and steel), is projected to increase by a factor of two to four, according to the Ellen McArthur Foundation; this in turn, may result in CO2 levels reaching 649 billion tonnes by 2100 if no substantial action is taken. But if businesses were to adopt a circular economy model, the amount of CO2 emissions emitted during the production process would be reduced by 40% by 2050.

There are numerous routes towards a low carbon future. One is through investment in research and development into breakthrough solutions and in the substantial improvement of existing technologies; another is the production of materials using renewable energy sources. Both these solutions are already achievable – and aluminium is one of them.

We believe that aluminium can be a building block of the circular economy thanks to its unique qualities – such as its infinite recyclability without degradation of quality. Today, a staggering 75% of all aluminium ever produced is still in use.

At the same time, the aluminium sector contributes 1.1 Gt CO2e or 2% of global emissions, according to the latest IAI figures. Despite the impact of COVID-19 on the global economy, the demand for aluminium is expected to continue to increase. Sectoral emissions are expected to increase by 50-60% if we do not act immediately.

The answer lies in switching from fossil fuels to renewable power sources. Sadly, according to some estimates, 74% of global primary aluminium is produced with non-renewable energy. However, a number of companies are already leading the transition with greener business models. One example is EN+/RUSAL’s usage of hydropower in its primary production process, a move that is substantially reducing its carbon footprint.

Aluminium produced with a significantly lower level of emissions has become one of the cornerstones of the supply chain for those producers who prioritise ESG principles. Manufacturers of consumer goods from automotive corporations to the packaging sector started looking at the ways of reducing the carbon footprint of the production cycle long before COVID-19 hit the markets. For instance, in 2019 Mercedes-Benz announced plans to make its new passenger car fleet carbon-neutral within two decades, while Audi is also aiming to be carbon neutral by 2050.

The bad news, however, is that amidst these aspirations to make production processes more sustainable, currently there is no singular unified approach to what can be called low carbon aluminium. Emission performance standards set by organisations such as the Aluminium Stewardship Initiative and Harbor Aluminium are a great first step, but unfortunately they are neither aligned nor provide a singular approach for the sector.

Whereas there are several producers of low carbon aluminium, there is a lack of consistency about the threshold level of its definition. A recently published study by the Carbon Trust includes a simple methodology to define the low carbon category ‘as a separate asset class’. Transparent labelling will become a crucial step on the way to the low carbon economy, but it cannot happen without market players such as the London Metal Exchange (LME) stepping in and enforcing such measures. The LME’s call for transparency regarding metal producers’ carbon footprints, and its recent launch of a low-carbon aluminium trading platform, are pivotal moves that will eventually bring low carbon solutions closer to consumers.

Building a net-zero economy is a herculean task and implementing such revolutionary changes alone is a very challenging undertaking for any one company. Initiatives such as the World Economic Forum’s Mission Possible Platform, which aims to support the harder-to-abate sectors such as aluminium to accelerate their decarbonization efforts, are there to support energy-intensive businesses and drive this effort collectively. Partnerships and effective collaboration are an essential element on the road to a net-zero world.

Yet despite big strides being made across the industry, the transition pathway is not a one-size-fits-all solution, as carbon footprints differ across regions and producers. However, for many businesses, a green recovery from COVID-19 may be a unique opportunity to start prioritizing circular approaches and low-carbon solutions. Clean energy is becoming cheaper and more reliable. Governments are recognizing this, and are focusing their post-COVID recoveries accordingly by directing green stimuli at developing more clean power. Proactively addressing the risk of a progressively uneconomic production base is essential as the true cost of carbon pollution is increasingly reflected in prices. The demand for low-carbon products, including aluminium, is only going to grow. Now is the time for the industry to collaborate by investing in innovation, technology and partnerships to meet that challenge.

Goumbook Back To Seed Planting Events After Lockdown Restrictions