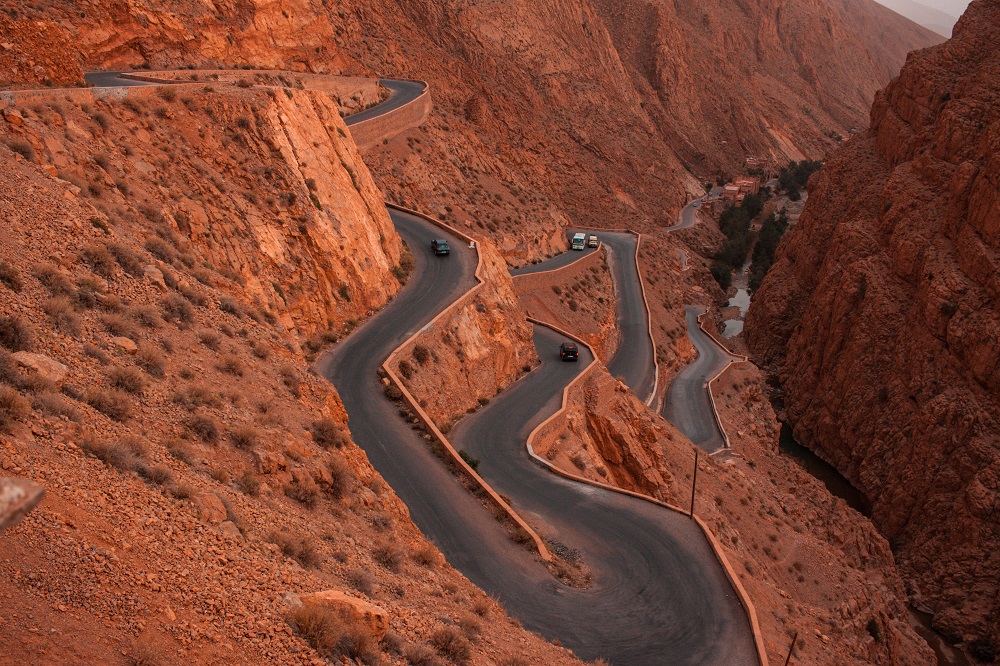 Contrary to conventional wisdom, Morocco is blessed with abundant natural resources. What the country lacks in hydrocarbons is compensated by the excellent solar and wind potential. Morocco has understood this a long time ago and directed the focus away from digging and drilling to harvesting the elements to produce very cost-competitive green electricity.

The Sahara Desert, which stretches into Morocco, is the world’s sunniest area year-round, with solar insolation levels of 2,500-3,000 kWh per square meter per year. But it is also one of the windiest areas on the planet, especially on the west coast. Average annual wind speeds at ground level reach 8-9 m/s in the western coastal regions. Good wind sites in Morocco have wind speeds that are comparable to offshore conditions in Europe.

Morocco has embarked on an ambitious renewable energy program with a target of 42% of renewable electricity by 2020, which was recently expanded to 52% by 2030, which corresponds to around 11GW (megawatt) of solar, wind and hydropower. In Ouarzazate, a beautiful city south of Morocco’s High Atlas Mountains, known as a gateway to the Sahara Desert and also known from ‘Game of Thrones’, Morocco built the Noor solar complex, consisting of CSP (Concentrated Solar Power) and PV (Photovoltaics) projects, totaling 582 MW at peak when finished. The scale of these projects and Morocco’s clever financial engineering, have brought down the cost in particular of CSP, which is now competitive with conventional power.

At the same time, Morocco still imports vast amounts of coal and is planning a liquified natural gas (LNG) terminal to cater for the growing domestic energy demand. The OCP Group (Office Chérifien des Phosphates), founded in Morocco in 1920 is one of the leading exporters of phosphate rock, phosphoric acid and phosphate fertilizers in the world. To make the fertilizer, however, OCP imports more than 1 million tons of ammonia every year at a cost of up to €0.5 billion. The feedstock for conventional ammonia is natural gas, a resource Morocco doesn’t have in meaningful quantities.

Hydrogen can be produced in Morocco from sun, wind and water. A combination of solar and wind power can provide a high load factor for the electrolysis process, leading to competitive cost of green hydrogen. Morocco announced bids of € 28 per MWh (megawatt hour) for an 850MW wind farm in 2019. The expectation is that electricity production cost will further drop to € 10-20 per MWh before 2030 at sites with good solar and wind resources. With electrolyser efficiencies of 80% and CAPEX (Capital Expenditures) of € 300 per kW in the future, hydrogen can be produced for about € 1 per kg, which is lower than e.g. in Europe.

The green hydrogen can be used in Morocco for a number of things:

Since COP22 (UN conference on climate change) in 2016, Power-to-X (PtX) has been gaining traction in the Moroccan climate change agenda and the country now aims to be a leading international hub for the production and export of high added-value green molecules, including green hydrogen, ammonia and methanol. The Institut de Recherche en Energie Solaires et Energies Nouvelles (IRESEN) is leading the charge and succeeded in prioritizing PtX on the agenda of the Moroccan Ministry of Energy and Environment. Furthermore, IRESEN has a key role in supporting academic and research efforts advancing the green hydrogen agenda in Morocco.

Figure 1 below shows how the green hydrogen R, D&D is embedded in the national green energy agenda: 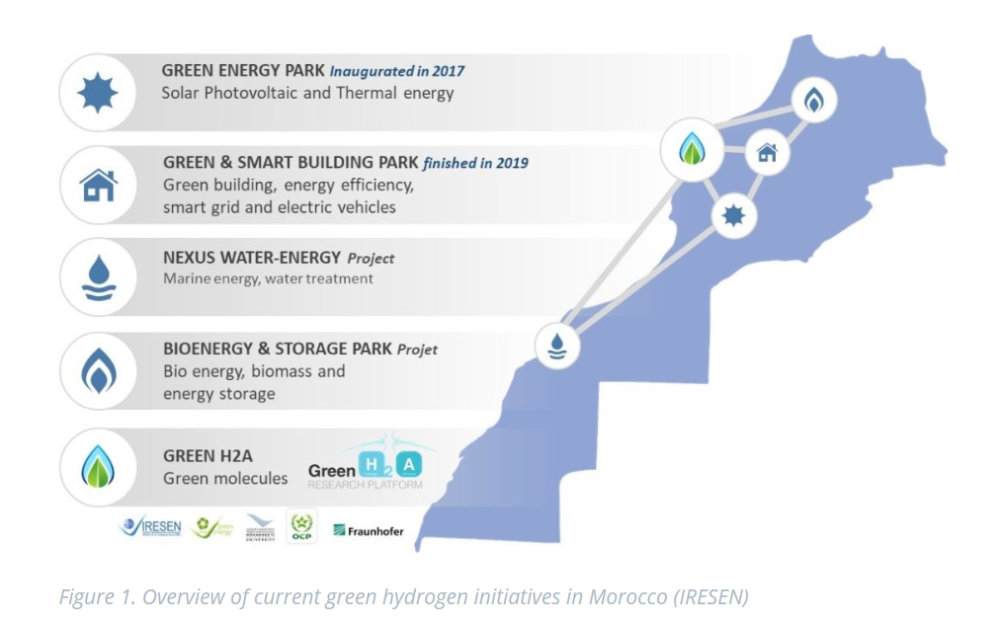 Hydrogen in the electricity sector

According to several studies carried out for Germany, Sweden, Spain and Europe, the demand for hydrogen to stabilize the electricity grid grows exponentially as a function of the share of variable renewable sources in the electricity mix. At a 50% share of variable renewable electricity, the grid can be managed with conventional means, but at 100%, up to 20% green hydrogen is required. If Morocco continues to grow the share of domestic green power, eventually large amounts of green hydrogen are required.

Green hydrogen made from renewable electricity and water will play a crucial role in Europe’s decarbonized future economy, as shown in many recent scenarios and as advocated by the new European Commission in the framework of the European Green Deal. In a system soon dominated by variable renewables such as solar and wind, hydrogen links electricity with industrial heat, materials such as steel and fertilizer, space heating, and transport fuels. Furthermore, hydrogen can be seasonally stored and transported cost-effectively over long distances, to a large extent using existing natural gas infrastructure. Green hydrogen in combination with green electricity has the potential to entirely replace hydrocarbons.

Due to its limited size and population density, Europe will not be able to produce all its renewable energy in Europe itself. Therefore, it is assumed that a large part of the hydrogen will be imported. Although hydrogen import can come from many areas in the world with good solar and wind resources, an interesting possibility is the import from North Africa. Already today, according to OPEC (Organization of the Petroleum Exporting Countries) and IEA (International Energy Agency), 13% of the natural gas and 10% of the oil consumed in Europe comes from North Africa, and 60 per cent of North Africa’s oil exports and 80% of its gas exports are sent to Europe.

This presents an enormous opportunity.