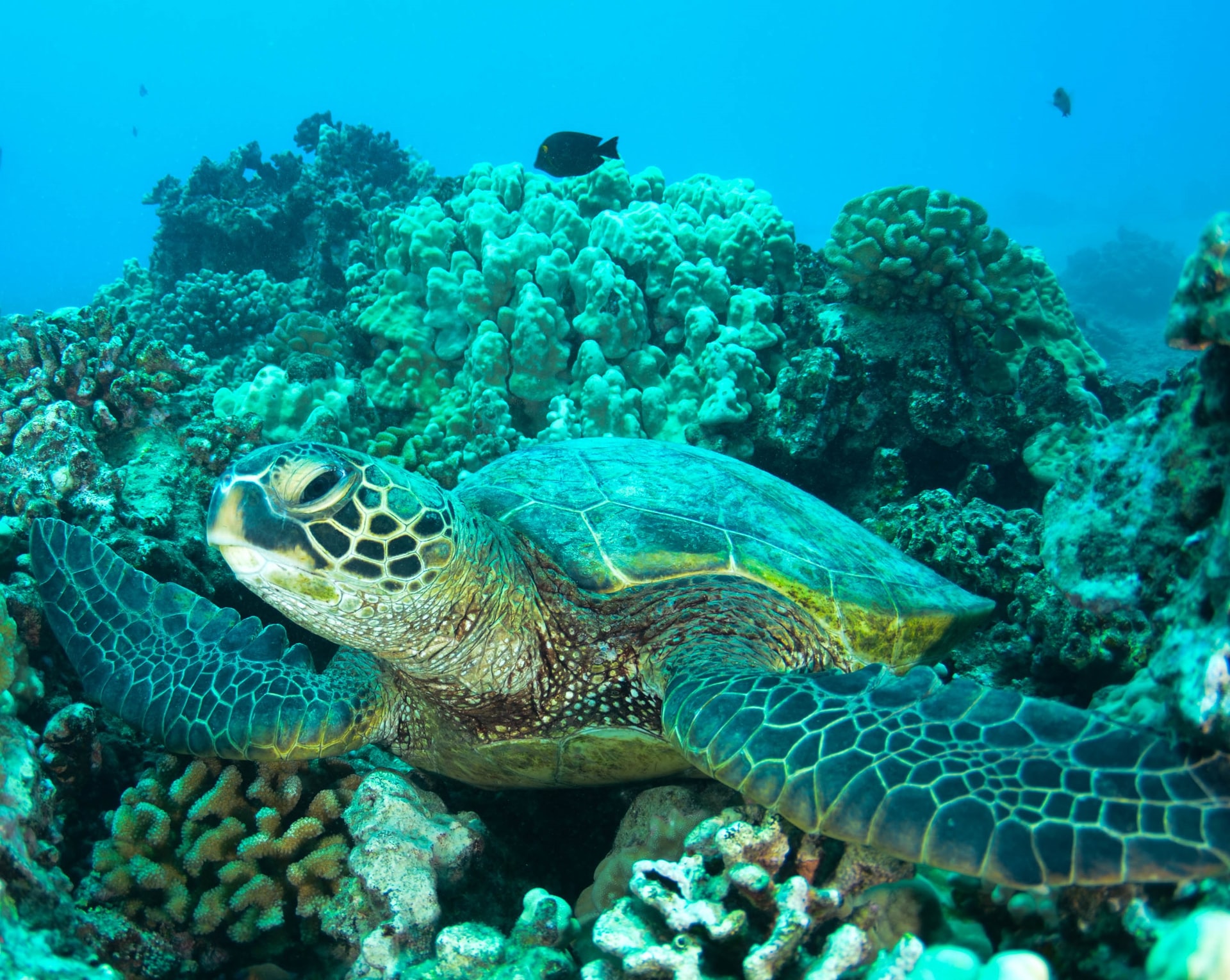 Sea turtles, as we know them today, have been around for 225 million years. They have survived effortlessly since then, until around 120,000 years ago, when one of their most dangerous enemies entered the world stage: humans. Of the seven species living in the world’s oceans, five are at home in the waters around the United Arab Emirates (UAE). Their occurrence is strongly indicative for healthy maritime eco systems, so it is alarming to see their numbers decline due to threat to or loss of their natural habitat. Let’s celebarte World Sea Turtle Day learning more about these majestic underwater creatures.

All seven sea turtle species are classified as either ‘endangered’ or ‘critically endangered’ on the IUCN Red List of threatened species. Species established in UAE waters are the hawksbill turtle, the loggerhead turtle, and the green turtle, while the leatherback turtle and the olive ridley sea turtle are migratory species that can only be found here during certain times.

The hawksbill and green turtle are the most common species in the region. The green turtle is mostly found in the waters around the emirate of Abu Dhabi in search of food, while hawksbill turtles also come to nest at the numerous islands and the mainland. Deep water investigations and discoveries of dead specimens were able to confirm the (temporary) presence of the other three species in the region.

Sea turtles are under serious threat

Sea turtles are a symbol for the protection of marine ecosystems: All sea turtles are at risk of diminishing populations and therefore strictly protected both by national laws and international conventions. All sea turtle species are listed in the CITES Appendix I and thus excluded from commercial international trade. The hawksbill turtle which is indigenous to the Arabian Gulf is classified as ‘critically endangered’ on the Red List: According to estimates only about 8,000 nesting females remain worldwide. Considering it on a global scale, all major threats to sea turtles are caused by humans.

While the exact quantification of populations is difficult in the deep sea, various indicators demonstrate the serious threat to sea turtles. Observations of nesting beaches, for instance, often show a significant decrease in the numbers of nesting females. Where hundreds of animals used to come to lay their eggs on the beach, nowadays only a few remain. Long-term documentation on nesting beaches shows that, for example, the population of leatherback turtles in the Eastern Pacific has decreased by almost 90 % in the past 20 years. The estimated number of animals caught each year in commercial fishing nets and longlines is alarmingly high. Around 50,000 leatherback turtles end up as unwanted by-catch on the longlines of the fishing industry each year. In Abu Dhabi, around 80 injured or sick hawksbill turtles were washed ashore in the first quarter of 2019 alone. Thanks to rehabilitation measures, most of them were able to be released into the wild again.

While green turtles live on a plant-based diet, the other sea turtle species mainly feed on jelly fish, crabs, soft corals, mussels, squid, sea urchins, and sea cucumbers. For the latter, the increasing amounts of plastic bags in the oceans are a deadly threat as they mistake them for jellyfish or other prey. An accumulation of indigestible plastics in the intestine of the animal can be fatal.

The UAE is one of 140 countries to which the endangered green turtle is native. Like most sea turtles it belongs to the migratory species and often lives in many different habitats throughout its lifetime. Worldwide, the number of these marine animals drops, however: Green turtles are especially vulnerable to the negative impacts of human activity – this is true for all phases of their life cycle, from egg to adult animal. Probably the most detrimental form of human behaviour is the intentional removal of eggs from their nesting spots, followed by uncontrolled development projects in coastal and marine areas. The Emirates Wildlife Society, in collaboration with the World Wildlife Fund, has launched the Gulf Green Turtle Conservation project which improves measures to protect the animals.

Government initiative for the protection of species

In the spring of 2019, the Ministry of Environment and Climate Change announced a plan to protect sea turtles in the emirates. The three-year plan is intended to promote the adoption of relevant laws to protect endangered species and prevent their direct and indirect causes of death. The main causes of death for sea turtles is industrial and small-scale fishery, habitat pollution by plastic waste and other foreign bodies on beaches and in the ocean, as well as the destruction of habitat by coastal construction projects, sea water desalination, and climate change. Apart from combatting those threats, the package of measures includes increased investments in research, monitoring, and exchange of information.

Currently there are 15 protected marine sites in the UAE, amounting to a combined area of about 12 % of the country’s territorial waters. These reserves represent an important refuge for sea turtles which they can use as nesting sites.

The Dubai Turtle Rehabilitation Project (DTRP) is based at Burj Al Arab Jumeirah and Madinat Jumeirah and is run in collaboration with Dubai’s Wildlife Protection Office, with essential veterinary support provided by the Dubai Falcon Clinic and the Central Veterinary Research Laboratory. There, injured or sick sea turtles found on the country’s coasts and beaches are nursed back to health and released back into the sea once recovered.

Without exception, all the turtles found by the DTRP were at one stage very sick or injured. Turtles are brought to Dubai’s Wildlife Protection Office or to the Aquarium team at Burj Al Arab by members of the public where the team closely monitor their recovery. During the recovery process, the animals are subjected to ongoing veterinary examination and monitoring, with appropriate medication or surgery being administered, as necessary. Once the team is satisfied with the progress and condition of the turtles, they are then transferred to the state-of-the-art Turtle Rehabilitation Sanctuary at Jumeirah Al Naseem. In a lagoon connected to the sea, the team can supervise the final stages of rehabilitation before releasing them back into the waters of the UAE.

As part of the reptile family, turtles are cold blooded, and their body temperature depends on their environment. Cold sea temperatures, as they occur in the region between December and February, have a particularly negative effect on young animals. It is during those months that the majority of turtles is found on the beaches. The degrees of weakness or injury with which turtles are found differ largely, ranging from injuries caused by entanglement in or ingestion of plastic waste to extreme cases of barnacle infestation on the shell. Animals that are already too weak to benefit from the treatment regime and succumb to their illnesses are sent to the Central Veterinary Research Laboratory where a full post-mortem examination is carried out to determine the cause of death.

After releasing recovered turtles into the wild, satellite tracking of individual animals is a crucial component for evaluating success as well as for further research: The aim is to equip as many animals as financially possible with satellite trackers in order to create motion profiles and adapt protected zones to the places the animals seek out. Furthermore, the DTRP project team plans and implements awareness campaigns in schools, public institutions, and tourist facilities to constantly advance the protection of endangered animals locally and globally.

Hawksbill turtles were the first guests on the now popular destination of Saadiyat island: For how long they have nested here already is not known but female hawksbills continue to lay their eggs on the vast beaches of the island each year. The 9 km beach strip accommodates several nests every year, each containing an average of 90 to 100 eggs. The Tourism Development & Investment Company (TDIC) began their Hawksbill Turtle Conservation Program in 2010, making it the first of its kind in the Arabian Gulf. Pedestrians can only access the beach via boardwalks to avoid damage to nests or the vulnerable dune ecosystem. Light and noise can distract newly hatched turtle babies, who use the moon for guidance when they make their way to the sea at night. In order to not disrupt their orientation, lighting on the beach is greatly reduced during breeding season. The exact location of nests is documented, the area is avoided by workers and all equipment has to be removed from the beaches so as not to block the path of hatchlings.

Sharjah’s Environment and Protected Areas Authority (EPAA), Emirates Nature-WWF and the Emirates Marine Environmental Group (EMEG) are working together to introduce a new era of conservation management with a project that focuses on Sir Bu Nair Island. His Highness Sheikh Dr. Sultan bin Mohammed Al Qasimi, Member of the Supreme Council and Ruler of Sharjah, declared Sir Bu Nair Island a protected nature reserve in 2000. Recognised as a Wetland of International Importance under the Ramsar Convention, the island was added to the tentative list of UNESCO World Heritage Sites in 2012. A haven for fisherman and pearl divers in the early 20th century, Sir Bu Nair Island is now home to rich and diverse habitats and species including turtles, birds and coral reefs. In addition to its ecological importance, the island has historical, cultural and political significance. 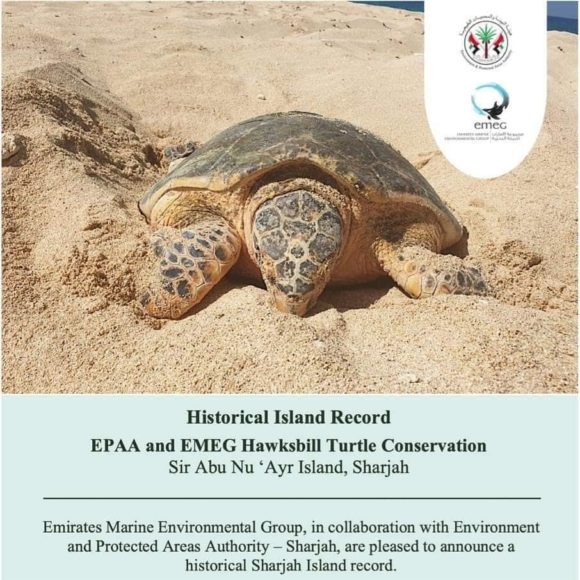 This June, the programme unveiled an record number for the Hawksbill turtles conservation: just over 400 nests were located in the island by the monitoring team!

Certain turtle species seek the UAE’s waters solely as foraging grounds, not to nest. Their numbers are estimated through aerial observations. According to a report released by the Environment Agency Abu Dhabi (EAD) in 2016, around 6,150 turtles looking for food were counted in during that year, especially during the winter months. Fortunately, the report even notes an upward trend.

What to do if I have found a turtle?

The DTRP team can be reached year-round between 8 am and 6 pm (04-301 71 98 or baaaquarium@jumeirah.com). If you ever find an injured or stranded sea turtle, get in touch with the team immediately. The drop-off point for turtles is at Wild Wadi Water Park. However, prior arrangement with a member of the DTRP team is mandatory, as employees of the water park cannot accept the animals. In the meantime, place the turtle in shallow water with a temperature of about 26°C, so that it can breathe easily by lifting its head.