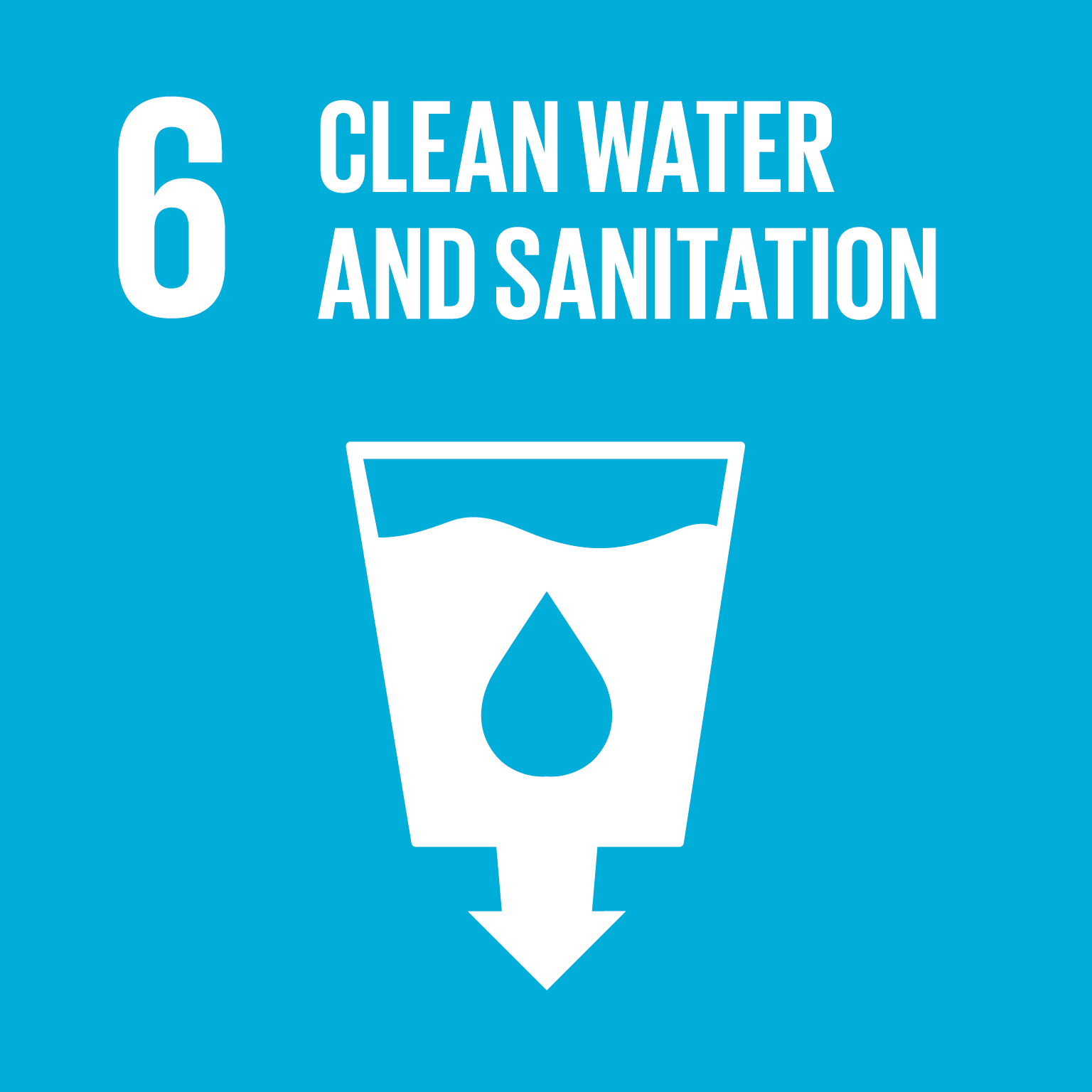 Clean water is a basic human need and should be easily accessible and affordable everywhere long-term. There is sufficient fresh water on the planet to make this goal a reality. However, due to poor infrastructure, investment and planning, every year millions of people die from diseases associated with inadequate water supply, sanitation, and hygiene.

SDG 6 seeks to ensure safe drinking water and sanitation for all, focusing on the sustainable management of water resources, wastewater, and ecosystems, and acknowledging the importance of an enabling environment.

Water challenges affect all three dimensions of sustainability and – if not addressed – will only worsen, increasing the impacts on people as competing demands for clean fresh water (for use by agriculture, households, energy generation, industries, and ecosystems) are aggravated by the effects of climate change.

Growing pressure on water quality and availability translates into increasing risk for businesses, governments, communities, and the environment.

The primary target of SDG 6 is universal and equitable access to safe and affordable drinking water, sanitation, and hygiene for all, paying special attention to the needs of women, girls, and those in vulnerable situations. So far, safely managed drinking water is available to 71 % of the world’s population, while 60 % have access to a handwashing facility and only 45 % use a safely managed sanitation service.

The targets related to improving water quality, wastewater treatment, and safe reuse include reducing pollution, eliminating dumping, and minimizing the release of hazardous chemicals and materials, halving the proportion of untreated wastewater, and substantially increasing recycling and safe reuse globally. These go hand in hand with the aim to substantially increase water use efficiency across all sectors and ensure freshwater supplies through sustainable withdrawal rates, ultimately reducing the number of people suffering from water scarcity.

To tackle water stress – currently 17 % of the world’s renewable water resources are being withdrawn – the implementation of integrated water resources management (IWRM) at all levels represents another important target. At the global level, IWRM implementation has reached 49 %, based on reporting from 172 countries.

Expanding international cooperation is an especially important target when it comes to the management of transboundary water bodies, and capacity-building is meant to support developing countries in water- and sanitation-related activities and programmes ($8.8 billion of water and sanitation-related ODA disbursed in 2017), including water harvesting, desalination, water efficiency, wastewater treatment, recycling and reuse technologies, with a focus on strengthening the participation of local communities in improving water and sanitation management.

Finally, the protection and restoration of water-related ecosystems, including mountains, rivers, wetlands, forests, aquifers, and lakes, also falls under SDG 6.

The Emirates are ranked 10th in the world in a league table of nations where water scarcity poses the greatest risk.

Among all sustainability goals, SDG 6 is one of the top three priorities for the UAE. It is considered critical because the UAE lies in a particularly arid part of the Middle East.

Water resources in the UAE can be classified into two main categories: conventional, such as surface water and groundwater, and non-conventional, such as desalinated sea water and treated wastewater. Underground water is extremely limited which is why the country must rely on other sources like desalinated seawater to fulfill the estimated water demand of around 5 billion m3 per year, according to the UAE Ministry of Energy and Industry. Besides being used as drinking water, desalinated sea water is the main source for municipal needs, while groundwater is mainly used for agricultural production. Treated wastewater is the major source for urban landscaping irrigation.

The UAE has also moved away from water-intensive crops and is experimenting with the use of treated wastewater for irrigation. In 2010, a Water Conservation Strategy was developed to better manage scarce water resources in the UAE. Additionally, the UAE aims to be a global leader in rain enhancement science and technology.

According to the 2016 Sustainable Cities Index, Abu Dhabi and Dubai are the top ranked Middle Eastern cities in the provision of high standards of water and sanitation networks. Despite the access rates to an improved drinking water source (100 %) and sanitation (96 %) as well as the safe treatment of household wastewater (99 %) being among the highest in the world and the degree of implementation of IWRM being quite advanced (75 %), the UAE shows a particularly concerning development in the area of water stress (1708 % of renewable resources withdrawn, which is the second highest rate in the region) leading to rapidly decreasing water use efficiency.

Water use efficiency: Crucial target for the UAE

Water use efficiency is one of the targets under SDG 6 and one that is especially crucial for water-scarce countries like the UAE where the production of drinking water is highly capital intensive.

In other words, with a long-term average annual in depth-precipitation of 78 mm per year, the renewable water resources in the UAE amount to 16 m3 per capita (2017), while 662 m3 per capita are being withdrawn.

Satellite data collected on the spatial extent of water-related ecosystems in the UAE shows a decline of 4 % over the latest observed period (2011-2015: 162 km2) compared to the baseline period (2005-2010: 170 km2), indicating that open water bodies, such as lakes, estuaries and artificial water bodies are shrinking in size, negatively impacting the development of flora and fauna in the respective habitats.

The Ministry of Energy & Industry unveiled the UAE Water Security Strategy 2036 in the year 2017, with the objective to ensure sustainable access to water during both normal and emergency conditions in line with local regulations, standards of the World Health Organisation, and the UAE’s vision to achieve prosperity and sustainability.
The objectives of the strategy include;

Developing storage capacity for the water supply system that will stay for a period of two days under normal conditions is one among the agenda of the strategy. The storage capacity will be equivalent to a capacity of 16 days in emergencies and can supply water for more than 45 days in extreme emergencies.

A savings of 74 billion AED is expected once the strategy gets implemented. The emission of carbon dioxide (CO2) associated with water desalination process will reduce by 100 million metric tons. 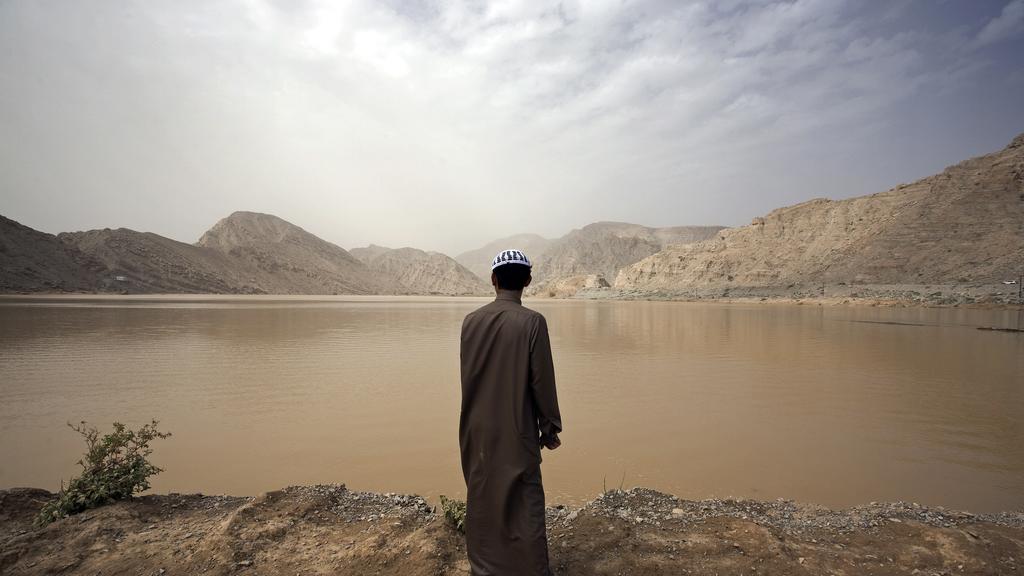 The Wadi Al Baih dam in Ras Al Khaimah has more rain accumulate than dams in the other emirates. Jeff Topping

Significant players and initiatives in the field of water

The UAE Water Aid initiative, Suqia, was originally launched as a campaign by H.H. Sheikh Mohammed bin Rashid Al Maktoum in cooperation with the Emirates Red Crescent to provide drinking water to 7 million people around the world. In 2015, UAE Water Aid (Suqia) was established as a non-profit organisation. Suqia works to combat poverty and disease, one of the objectives set by the Mohammed bin Rashid Al Maktoum Global Initiatives. This is done by finding solutions to water scarcity, serving areas suffering from drought or lack of clean water, and providing clean water using modern technologies such as purification and desalination of water through solar energy. Suqia has provided water in various countries of the world, with ten well drilling projects currently underway in Ghana, Benin, Tajikistan, Afghanistan, and Somalia benefiting a total of 60,000 people.

The Water Alliance (previously SURGE) was started in Dubai in 2014. It was born from the vision that no one should be without safe drinking water and that those more privileged can be more responsible for their water use. Addressing all sectors of society, The Water Alliance educates children and adults through school programmes and corporate workshops to become mindful of their water footprint working toward the goal of preserving and protecting water resources.

While businesses in all sectors can make a positive contribution by adopting a water stewardship strategy, specialists in the field of water management or technologies take it one step further by coming up with innovative approaches such as water production through air. Zero Mass Water sells a technology called SOURCE, which is referred to as “the Tesla of atmospheric water generation” and creates high-quality drinking water completely off-grid, from just sunlight and air. 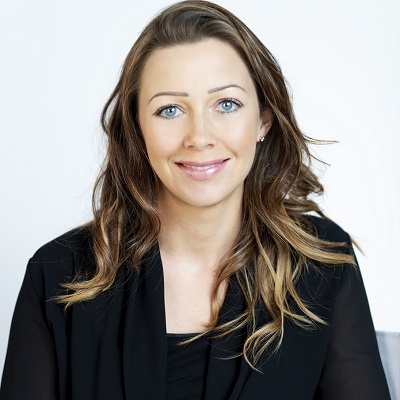 One Moto is driving the wave of sustainability in Dubai

BestBy, the start-up dedicated to reducing food waste in the UAE