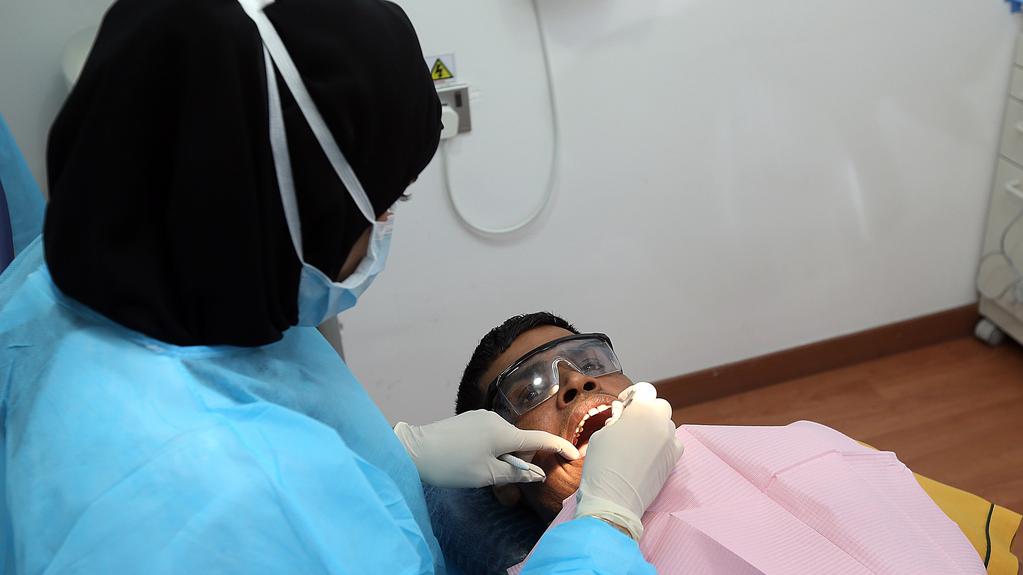 The Oral Hygiene initiative of Sheikh Hamdan bin Mohammed, Crown Prince of Dubai, will treat 4,000 workers at the College of Dental Medicine in Dubai Healthcare City.

A free dental screening programme that provided more than 700 labourers with their first check-up is being repeated this year, with thousands of more workers scheduled to have their oral health examined. The Oral Hygiene initiative of Sheikh Hamdan bin Mohammed, Crown Prince of Dubai, will treat 4,000 workers at the College of Dental Medicine in Dubai Healthcare City.

Dentists who took part in the project between May 19 and December 8 last year discovered that about 34 per cent of the 2,000 men tested had not previously been for a check-up. This year’s programme is being expanded to offer similar care to factory workers, with an eye on increasing the numbers in future. Although there was less tooth decay than would be expected in an average male population, results have shown there was an above average prevalence of gum disease linked to diabetes and heart disease.

Dr Iyad Hussein, one of the dentists who treated the workers, said the trend could have been due to genetics or a result of many of the men being smokers.

“The patients I treated seemed to have more gum disease than expected,” he said. “Poor oral hygiene can cause tooth decay and disease, but for those who are genetically susceptible to gum disease there is a well established link between diabetes and heart disease. It is an unusual connection, but it is there.”

Dental plaque and tartar, tooth decay and gum disease were found to be the most common oral health problems. Almost half (46 per cent) the workers had persistent dental pain, whilst 44 per cent needed teeth to be removed. Almost 30 per cent had missing teeth, and 81 per cent needed oral hygiene programmes.

Many of the men tested were from Asia, and 10 per cent had diabetes. About 72 different nationalities make up the labour population in Dubai.

“The problems we found reflected what we have seen in populations in their home countries,” said Dr Amar Hassan Khamis, who has worked as a consultant with the World Health Organisation in Africa and South-East Asia, and was also involved in the Dubai project.

“We used scientific methods to show what the problems were, and a projection of what treatment was required.

Continue reading the article on The National

Study Finds Infants Have Higher Exposure To Microplastics Than Adults

How To Choose The Best Face Mask For A Healthier Environment