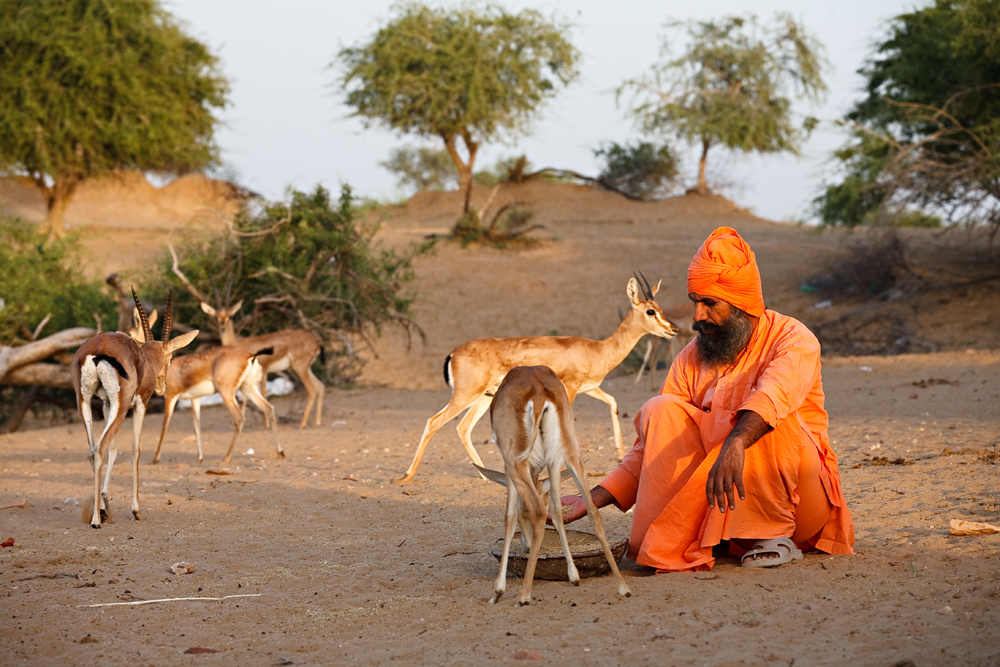 These past days we have been planting many Ghaf trees in Dubai and Sharjah, taking part in the Give a Ghaf Tree Planting Program and World Planting Week activities, and today I received a very special email that opened my heart and taught me a new lesson:

I am native of India and feeling happy to see such an initiative taken from you regarding plantation and conservation of Ghaf tree. I belong to Bishnoi community and our 363 male and female guys sacrificed there lives to save these Ghaf trees in India few hundred years back, they stuck to the trees and king ordered to the army to cut the trees along with men and women.

You are invited to see our heritage and if need any short of assistance, our volunteers will be ready to serve the cause. Thanks & Regards”

I had never heard of the Bishnoi and I was curious to know more! This is what I found out doing some research…

For over five centuries, the Bishnoi community of Rajasthan has been living in harmony with nature and wildlife in India. They have made wildlife conservation and environmental protection their life’s work, protecting trees and wildlife, in particular the Blackbuck antelopes.

Bishnoi is a religious group found in the Western Thar Desert of India, the desert overlaps areas of Punjab, and Sindh in Pakistan. The name is derived from bis (twenty) and nai (nine) i.e. followers of 29 principles given by Guru Jambheshwar.

Guru Jambheshwar gave the message to protect trees and wildlife around 540 years ago, prophesying that harming the environment means harming yourself. He formulated twenty nine tenets. The tenets were not only tailored to conserve bio-diversity of the area but also ensured a healthy eco-friendly social life for the community.

Out of the 29 tenets, 10 are directed towards personal hygiene and maintaining good basic health, seven for healthy social behavior, and five tenets to worship God. Eight tenets have been prescribed to preserve bio-diversity and encourage good animal husbandry. These include a ban on killing animals and felling green trees, and providing protection to all life forms.

The community is also directed to see that the firewood they use is devoid of small insects. Wearing blue clothes is prohibited because the dye for coloring them is obtained by cutting a large quantity of shrubs.

In 1730, 363 Bishnoi men, women and children led by Amrita Devi died protecting trees from cutting by the Kings’ men. This incident happened in Khejarli which is a village in Jodhpur district of Rajasthan, India 26 km south-east of the city of Jodhpur. The Bishnois sacrificed their lives while protecting trees by hugging to them.

The story of the Khejarli Massacre (or the Ghaf Massacre)

The Bishnoi narrate the story of Amrita Devi, a Bishnoi woman who, along with more than 363 other Bishnois, died saving the Khejarli (Ghaf) trees.

Nearly two centuries back, Maharajah Abhay Singh of Jodhpur required wood for the construction of his new palace. So the king sent his soldiers to cut trees in the nearby region of Khejarli, where the village is filled with the large number of trees. But when Amrita Devi and local villagers came to know about it, they opposed the king’s men. The feudal party told her that if she wanted the trees to be spared, she would have to give them money as a bribe. She refused to acknowledge this demand and told them that she would consider it as an act of insult to her religious faith and would rather give away her life to save the green trees.

This is still remembered as the great Khejarli sacrifice. Some Bishnois who were killed protecting the trees were buried in Khejerli village near Jodhpur, where a simple grave with four pillars had been erected. Every year, in September, the Bishnois assemble there to commemorate the extreme sacrifice made by their people to preserve their faith and religion.

The age-old Bishnoi ethos push us toward new practices and efficient ways of treating our threatened world environment.

I hope you enjoyed this story as much as I did, I feel blessed to learn every day a little bit more and to meet incredible people and communities that are dedicated to save and protect our natural world.