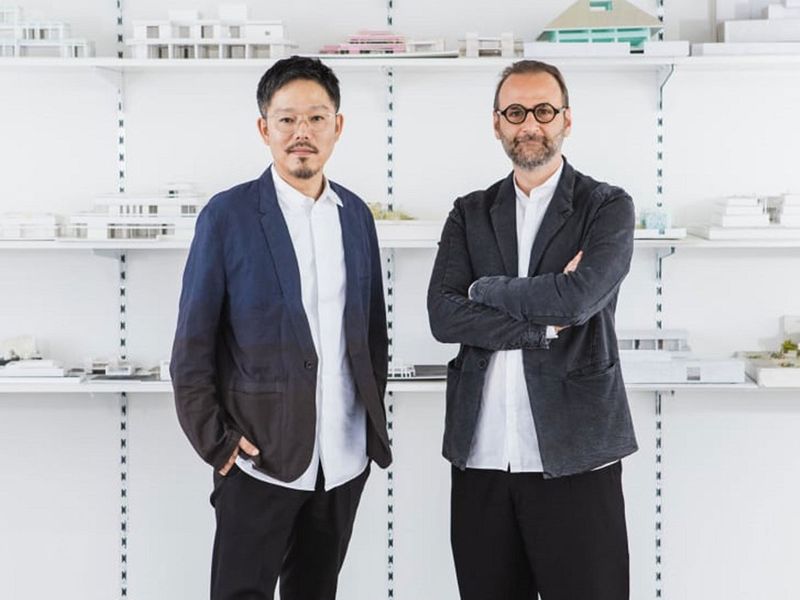 A new breakthrough lowers the footprint of making both concrete and fresh water. Cement is typically manufactured through a carbon-intensive heating process, unless we can make a cleaner version–using what’s left over after desalination.

Concrete is the most widely used material in the world: You see it in the streets you move through, and it might line your home or apartment. Globally, around 27 billion metric tons of concrete are produced each year.

But making cement–the mineral compound that constitutes the most crucial ingredient of concrete–is an extremely carbon-intensive process.

Cement is produced in factories with massive kilns where raw materials, like limestone, clay, and shale, are heated to temperatures up to 1550 degrees Celsius, then ground into a powder. Heating the cement minerals to such high temperatures poses a sustainability concern, says Kemal Celik, professor of civil engineering at New York University Abu Dhabi and the director of the Advanced Materials and Building Efficiency Research (AMBER) Laboratory.

Producing cement accounts for around 7% of global CO2 emissions.

If not disposed of properly, brine can negatively affect our environment and marine life.

The freshwater-scarce UAE has one of the biggest desalination operations on the planet. It produces roughly one fifth of the world’s brine as a byproduct — roughly 28 million cubic meters a day, based on a report from UN in 2019. But discharging brine into the ocean can harm marine life. Finding a use for desalination brine has come into nationwide focus, prompting the launch of a 3.4 million AED – “Rethink Brine Challenge” just 12 months ago. This competition aims at finding alternatives to brine discharge by developing commercially viable construction material from brine.

This week, two architects from Dubai announced they could make cement out of brine.

Wael Al Awar and Kenichi Teramoto, principal architects at Waiwai, enlisted the scientific know-how of universities within the UAE and Japan to create a cement made utilizing brine generated by the UAE’s desalination systems. They had been impressed by the UAE’s mineral-rich ‘sabkha’ — salt flats which might be half of the nation’s wetlands. “It a huge area, that’s often overlooked,” Al Awar said.

Sabkha have been utilized in structure earlier than centuries in the past, blocks had been made from salt flats and used to construct Siwa, a medieval city in Egypt near the Libyan border. But instead of mining the fragile sabkha ecosystem, Al Awar and Teramoto turned to waste brine, which incorporates many of the identical minerals.

In early 2019, Celik and his team at AMBER conducted different tests to find a better way to make the material. He and his team already knew that magnesium oxide, a mineral found in salt deposits like lakes and salt flats, could be converted into a type of cement. In the United Arab Emirates, where Celik and his team work, they realized they could tap the over 70 operating desalination plants for access to brine left over from the process of purifying seawater, which would otherwise just be dumped back into the Gulf.

Synthesizing the magnesium oxide in brine into a cement-like substance requires much less heat than making ordinary cement. And, Celik says, as magnesium oxide cement hardens over its lifetime, it absorbs carbon dioxide over time to gain strength, potentially making it a carbon-negative building material.

The briny cement seems to be a way for the building industry to lower its associated emissions, both by reducing the amount of carbon needed to produce the material, and by the material over time pulling excess carbon from the atmosphere.

In April 2019, the AMBER team presented tests showing that it’s just as strong and adaptable as ordinary concrete. And, Celik says, this method of making cement from leftover brine provides a crucial outlet for the desalination industry, which is quickly expanding in places that struggle with access to potable water, but struggling to dispose of its briny waste in a way that doesn’t alter the salinity levels in nearby bodies of water, which can hurt the surrounding ecosystems.

Celik says the cement was cast into blocks, which were then placed in a carbon dioxide chamber to set — an innovation which speeds up the production process. The cement was subjected to testing in the UAE before being sent to Japan, where blocks went through further strength and rigidity tests. In addition, an algorithm was developed to calculate how safe the blocks would be if used in construction, Mika Araki, a structural designer at the University of Tokyo, told CNN.

Lab tests have proven that cement made with reactive magnesium oxide is just as strong as the Portland variety, Celik says, and further studies will tell them what kind of other internal reactions are taking place over the long-term that could impact the way it’s used. Work is also ongoing to speed up the carbonation process.

Precast blocks could be used to construct a single-story building “tomorrow,” says Al Awar, but he and Teramoto hope to develop the product further for use in multi-story buildings.Al Awar claims their magnesium-based cement can “perform to the equivalent of Portland cement,” which uses calcium carbonate as a raw ingredient and is the most commonly used cement in concrete manufacture. However, the magnesium cement has its limitations. As a salt-based product, it is liable to corrode steel reinforcement, he says, although reinforcement with other materials is possible.

In May 2021, Al Awar and Teramoto will curate the UAE National Pavilion on the Venice Biennale of Architecture, the place where the new cement will go on show for their “Wetland” exhibition. The pavilion will probably be constituted of magnesium-based cement, though Celik says the cement won’t be brine-based as a result of they don’t seem to be but able to scale-up manufacturing. “The research is still early,” says Al Awar. “It should go through the natural process of experiments and trial and error to get somewhere. But we are very optimistic.”

Is our destruction of Nature responsible for Covid-19?