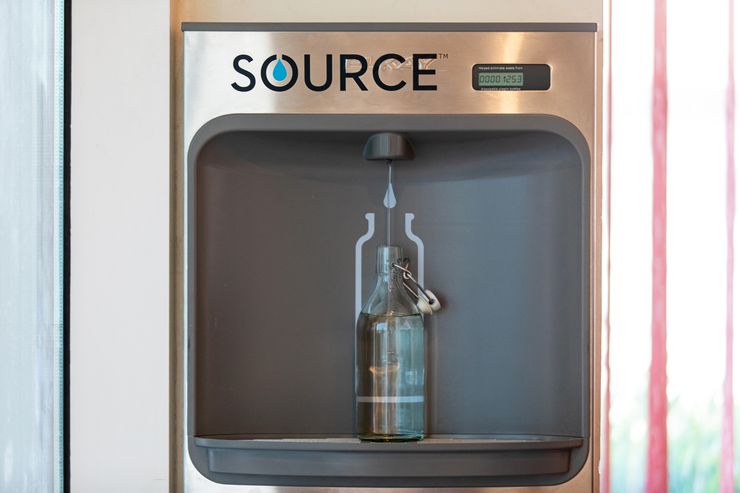 The Arabian Desert scarcely seems like an ideal place to source drinking water. But an Arizona-based technology firm is doing just that, in what may be the first operation of its kind. Instead of drilling wells or purifying seawater, it will wring moisture from the air to create bottled water at a plant 20 kilometers (12 miles) from Dubai.

The company, Zero Mass Water, will use renewable energy instead of the fossil fuels that power the many desalination facilities in Dubai and the rest of the United Arab Emirates. The project could offer a model for other parched nations to produce drinking water in a more sustainable way and even spur agricultural breakthroughs to improve food security.

“The bottling plant is run on solar, the bottles we use are recyclable and the caps are sustainable,” said Samiullah Khan, general manager at IBV, an Emirati firm that will buy the water. The caps will be made from bamboo, he said.

While water-from-air technology is used elsewhere, Zero Mass’s operation stands out for its size and intention to bottle the water, according to Roland Wahlgren, who runs Atmoswater Research, a consulting firm in Vancouver.

Zero Mass isn’t going to rival bulk water processors any time soon. It will initially only be able to produce up to 2.3 million liters (607,000 gallons) annually — about the volume of a typical Olympic swimming pool.

Water-from-air technology is still much more expensive than desalination for the same output of water. So Zero Mass’s will be in the same bracket as imported, high-end brands such as Evian and Fiji, said Khan. They sell locally for around 10 dirhams ($2.72) a liter.

Demand for bottled water is high in the UAE. The average resident drank 127 liters last year, placing the country in the top ten globally, according to market research firm Euromonitor International.

The Zero Mass facility is under construction in the village of Lehbab, a hub for camel-breeding and desert safaris. IBV, owned by Butti Bin Maktoum Bin Juma Al Maktoum, a member of Dubai’s royal family, will sell the water in glass bottles to hotels and other buyers, Khan said.

The plant will start off with 1,250 hydropanels, each of which costs $2,500, though the plan is to have closer to 10,000 eventually. Zero Mass declined to specify how much it has invested in the project.

The rectangular boxes — measuring around 2.4 meters (8 feet) by 1.2 meters — absorb water vapor and extract it using solar energy. Although they can operate almost anywhere the sun shines, Dubai’s hot and humid climate makes the emirate a prime location, according to Cody Friesen, founder of Zero Mass.

Hydropanels have been used before in the UAE, though on a much smaller scale, at desert camps for tourists and in some homes, according to Zero Mass. The panels have dust filters and use a chemical compound that captures only water molecules, ensuring the water is purified even if the air is polluted.

The next frontier is agriculture, said Friesen, who also teaches engineering at Arizona State University.

Gulf nations want to reduce their heavy dependence on food imports, especially with the coronavirus pandemic disrupting global supply chains. This month the UAE imported 4,500 dairy cows from Uruguay to boost milk production. It’s also trying to farm rice locally, the success of which will largely depend on using sustainable amounts of water.

“The next thing is really about producing water for growing tomatoes and other things locally so you don’t have those transportation costs and cash flowing out of the economy to buy food,” said Friesen.

Water-from-air is only suitable for farming in enclosed environments such as warehouses, he said. In the UAE, the number of companies growing vegetables and herbs using hydroponics and other indoor-farming methods — which consume much less water than conventional agriculture — has grown rapidly in recent years.

“With hydroponics, it’s a huge advantage to be using very pure water to begin with,” said Wahlgren. “If you’re using desalinated water, there’s still quite a large salt component, which can be harmful to the plants.”